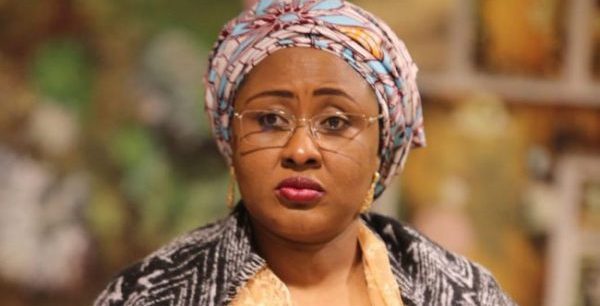 Like none before her, wife of the President, Aisha Buhari, has shown that she is not just a wife minding things in the “sitting room, the kitchen and the other room”, like her husband, President Muhammadu Buhari would like, but a First Lady activist.

A few days ago, she went on her twitter page and shared a video of Sen. Isah Misau from Bauchi state, addressing the Senate on what he believed were failings of Aisha’s husband.

Sen. Misau, an ex-police officer, whose father also left the force as an Assistant Inspector General, had recently courted controversy with his expository attacks on the office of the Inspector General of Police, and the person of the incumbent police chief, IGP Ibrahim Idris.

He was up before the senate where he raised issues about the appointment of a substantive Director General for the National Intelligence Agency (NIA) by the President.

Sen. Misau had said in the video which has gone viral, that the president’s choice, Ahmed Abubakar, was not qualified for the top job having left service after failing two promotion examinations.
He also said Buhari’s cabinet was peopled by incompetent characters adding that half of his ministers have not been able to justify their appointments by way of performance.

Misau also said that the new NIA DG may have gotten his appointment because of his closeness to a motley group that has hijacked the presidency.
Aisha obviously liked the message passed on by Sen. Misau and graciously shared the video. The message in the video tallies with her views about her husband’s administration.

President Buhari also confirmed insinuations that he had lost control of government to a few persons around him when he told visiting All Progressives Congress (APC) officials, at a dinner in the Presidential villa that he has been “locked up” in the expansive villa.

However, Aisha’s decision to share the video is seen as one of her silent campaigns to voice out against the gradual eclipse of her husband’s presidency, no thanks to the few that had estranged him from governance and imposed their will on him.

The cabal? ‘Everybody knows them’

Aisha rattled the confines of the Presidential Villa and threw spanners in the works for the president when she openly voiced her frustration with the leadership structure that had caged her husband and made him ineffective.

In October 2016, Aisha broke what seemed like the norm and voiced out when she spoke to the Hausa service of BBC. She accused a cabal of hijacking government. She also accused the cabal of hijacking her husband and preventing him from working for those who elected him. She also vowed that if the situation continued, she would not make herself available to campaign for her husband in 2019.

Specifically she said: “…some unknown people were brought in to lead the people. These people were not even around during the campaigns. What we promised and what we told the people as regards what we don’t want. But today, some of them are boasting that they are not politicians, even though they are occupying seats meant for politicians. I am not happy with the manner with which things are going on. Although it may seem we have just begun, I know some appointments have been made here and there like those that actually worked for the party, but even those brought in to occupy some agencies you will discover are fighting with their state governors”.

Prodded to name those she was referring to, Aisha said: “Everybody knows them”, reminding also that “these people I am complaining about are not more than two or three. I am pleading with them to have sympathy for the people, open their arms to embrace all for the smooth sail of governance not even for today’s sake but even against 2019. What I fear for them is the revolt of over 15 million Nigerians.”

Asked if her husband was aware of the existence of the persons she referenced, Mrs. Buhari said “whether he knows or not, those who voted for him know. I don’t even need to tell him anything after all he can see. Of all the people he appointed, assuming they are 50, if you ask him, he didn’t know 45 of them. Even me that has been with him for 27 years, I don’t know them.”

Tackling her husband for appointing people he did not know and cannot vouch for, Aisha gave insight into how such persons found their way into her husband’s cabinet. She disclosed that “some people are sitting down in their homes folding their arms only for them to be called to come and head an agency or a ministerial position”.

Then, she dropped a warning: “I have decided, as his wife, that if things continue like this up to 2019, I will not go out and campaign again, and ask any woman to vote like I did before. I will never dot it”.

‘I don’t know which party my wife belongs to’

Her husband did not like the idea of his wife stepping forward politically. He was jolted by the expose and opposition from his bedroom. And he did not waste time to tell the world so when he met with German Chancellor, Angela Merkle. Speaking from Germany where he had gone for a summit in the city of Berlin, Buhari reminded his wife that her actual place was in the kitchen and his bedroom.

“I don’t know which party my wife belongs to, but she belongs to my kitchen and my living room and the other room”, he said while standing on the podium with Merkle. He also said “I claim superior knowledge over her and the rest of the opposition because in the end I have succeeded”, a statement analyzed to mean that he now sees his wife as the opposition within.

Her husband’s rebuke was seen to have given strength to those she accused of hijacking her husband’s powers and in no distant time, they unmasked themselves. Soon after Buhari’s response, information filtered out that the Chief of Staff, Abba Kyari and Secretary to the Government of the Federation (as he then was), Babchir Lawal, amongst other people had reviewed the BBC interview and in their chat referred to Aisha as the “Adamawa Bomber”, a reference which puts her, and women from that part of Nigeria, as non-conformists. Aisha is a native of Adamawa state.

Tale of the missing syringes

Aisha will rattle settled waters again when she paid a visit to the State House Clinic Abuja for the launch of a project under her pet foundation. She seized the opportunity to query the lack of equipments at the hospital despite the huge amounts budgeted for it by the Federal government.
This happened in October of 2017, about 12 months after she first broke the ice on her husband’s lackluster presidency.
On the visit, Aisha was taken aback that the hospital, which ought to be prime medical facility for the presidency, lacked syringes.
She called for immediate probe.

Hear her: “Before I commence my speech, I will like to be realistic to say a few words concerning health in Nigeria and healthcare delivery system in Nigeria. It is very very very poor. Sorry to say that. I am happy that the CMD of Aso Clinic is here. Is he around? Ok, he is here.
Ok. Dr. (Hussain) Munir, I am happy that you are here. As you are all aware for the last six months, Nigeria wasn’t stable because of my husband’s ill health. We thank God that he has fully recovered now.

“If someone like Mr. President can spend several months outside Nigeria, then, you wonder what will happen to the common man on the streets in Nigeria.
“Few weeks ago I was sick as well. They advised me to take the first flight out to London, I refused to go. I said I must be treated in Nigeria because there is a budget for an assigned clinic to take care of us.
“If the budget is N100million, we need to know how the budget is spent. Along the line, I insisted they call Aso clinic to find out if the x-ray machine is working. They said it was not working. They didn’t know I was the one that was supposed to be in that hospital at that very time.

“I had to go to a hospital that was established by foreigners in and out 100 percent. What does that mean? If something like this can happen to me, no need to ask the governor’s wives what is happening in their states.
“I am sure that Dr. Muir will not like me saying this but I have to say it out. As the Chief Medical director there are a lot of constructions going on in this hospital but there is no single syringe here. What does that mean? Who will use the building? We have to be good in reasoning. You are building a new building and there is no equipment, no consumables in the hospital and constriction is going on”.

The scandal this time

By sharing Sen. Misau’s video, Aisha restates her opposition to the way her husband has surrendered the presidency to a few of his handpicked friends. She affirms that Sen. Misau spoke the truth; and her version of it too. But what lies ahead is ominous.

Aisha had promised that “if things don’t change” she would not be available for 2019 campaigns. Obviously, don’t seem to have changed from what they were in October 2016 when she first broke the ice. Independent National Electoral Commission (INEC) has announced the 2019 election timetable. This indicates that 2018 is election year for the ruling APC.

In a few more months, 2019 election activities will be flagged off. Does Buhari still have the time he needs to make the changes that Aisha expects? With the President telling Nigerians that he has never been in haste to take any decision or to act on any issue, Aisha’s expectations may have been foreclosed for good. But will she keep her vow never to mount the podium for her husband and APC again? A few more months will say.