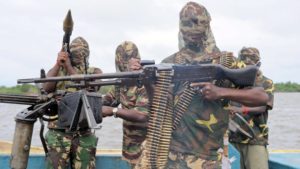 The Niger Delta Avengers, the group responsible for renewed insurgency in Nigeria’s oil rich region, has expressed readiness for a peace deal with the federal government.

The group, in a statement posted on its website late Saturday, said its disposition to dialogue and peace deal with government was conditional. Among its condition was multi-side engagement of relevant actors, restructuring Nigeria, and a cessation of military offensive in the region.

“We are going to support any collective/negotiation team emerging from the Chief (Dr.) Papa Edwin Kiagbodo Clark Niger Delta elders and genuine stakeholders conference to engage with the federal government of Nigeria, representatives from the home countries of all multinational Oil Corporations and neutral international mediators,” the group said.

Such negotiation should be “focused on achieving the short, medium and long term frameworks and objectives to de-escalating conflicts in the Niger Delta,” the group said in the statement by its spokesperson, Mudoch Agbinibo.

The Avengers has carried out attacks on oil and gas installations, devastating Nigeria’s output and revenue.

It has demanded a sovereign Niger Delta. On Thursday, it reaffirmed its vow to declare independence from Nigeria on October 1, a threat observers believe was not practicable.

In Saturday’s statement, the militant group suggested the proposed dialogue had an easy task as previous conferences and reports enunciated how to restructure Nigeria.

“Most of the frameworks and objectives are clearly stated in various reports, declarations and recommendations of the likes of the Sir Henry Willinks minority rights reports of pre-independence Nigeria (1957-8), The Kaiama Declaration document, The General Alexander Ogomudia report, The Leedum Mittee headed, Niger Delta Technical Committee report and restructuring to fiscal federalism.”

The militant group said the Edwin Clark dialogue initiative had a fragile mandate.

“Our advice to our Niger Delta elders and genuine stakeholders is that, whenever this inhuman project called Nigeria and her government is ready for dialogue/negotiations with them, this mandate should be treated with that care as driving a vehicle like that of a truck laden with fire,” it said

The group added that that it would observe a ceasefire and suspend attacks on oil installations belonging to multinational oil companies. The cessation of hostilities, it said, will only be sustained on the condition Nigeria security outfits and armed forces stop counter offensive.

“We are going to continue the observation of our unannounced cessation of hostilities in the Niger Delta against all interest of the Multinational oil Corporations,” it said. “But we will continuously adopt our asymmetric warfare during this period if the Nigerian government and the ruling political APC continues to use security agencies/agents, formations and politicians to arrest, intimidate, invade and harass innocent citizens, suspected NDA members and invade especially Ijaw communities.”

“Therefore, we will give our Niger Delta elders and genuine stakeholders that tacit support to the dialogue table with the government and the Multinational oil Corporations whenever the enabling environment prevails.”