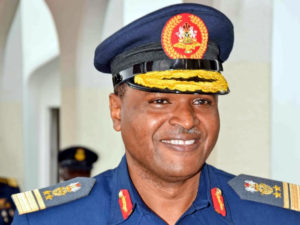 The Chief of Air Staff, Air Marshal Sadique Abubakar, says the Nigerian Air Force has no intelligence on whether the Chibok girls are in Sambisa Forest or not.

Abubakar, who spoke during an interactive session with journalists in Abuja on Saturday, however, said the NAF was working round  the  clock to rescue the girls and other Nigerians abducted by Boko Haram.

The NAF chief also commented on the operation of the force in the South-South, saying the air force would not bomb Niger Delta.

When Abubakar was asked if the air force had any intelligence on whether Chibok girls were in the Sambisa Forest or not, he said, “Honestly we don’t. That is the truth of the matter. Even if you see women that are dressed in hijab, how are you sure they are women; that they are not men? It is only when you get there and they remove the hijab that you now realise that they are men and they have their rifles.

“There is no credible intelligence that will specifically tell you that these girls are here.”

He said the air force flew its planes daily with the hope of sighting the Chibok girls, adding that the military, like other Nigerians, was passionate about them.

He said about 50 per cent of the NAF flying missions in counter-insurgency operations were devoted to Intelligence Surveillance Reconnaissance.

According to him, the ISR is aimed at rescuing the Chibok girls and other Nigerians abducted by the sect.

He said, “There is no day that the sun rises and sets that we do not go out hoping to see these girls. From January this year to August 17, we flew 2,600 hours.   About 50 per cent of that was Intelligence Surveillance Reconnaissance.

He dismissed the latest Boko Haram video, where the sect displayed some girls, which it claimed were killed by military bombardment, as cheap propaganda.

Abubakar explained that there was no way bodies of people killed by bombardment could be intact as shown in the video.

He stated, “Even the IED (improvised explosive device) that they (the sect) developed, have you ever seen a complete body together after an attack on any location?”

He insisted that what was shown in the video could not have been something that happened after an air strike.

He added, “These guys are just trying to whip up sentiment because they know that every Nigerian is concerned about the girls.”

He said although there was no military operation without collateral damage, the air force was doing everything possible to determine legitimate targets.

The air force chief said Sambisa forest, which is about 60,000 square kilometres, was a difficult terrain, especially for the land forces.

He explained that equipment could get stuck in the forest during the rainy season.

He added that with what the air force had seen from its reconnaissance, it was difficult to say that the place was still occupied.

Abubakar said with the logistics base of the sect destroyed by the air force, it would be easier for land forces to move into the forest during the dry season.

He also disclosed that the air force would soon commence its operations in the South-South.

He stated that the air force would not bomb the Niger Delta, but would protect the people and facilities.

“We are not going to bomb the Niger Delta;  we are going to protect the people and oil and gas infrastructure,” he stated.

He added that NAF had entered into partnership with 15 Nigerian universities and polytechnics, through which it had been producing spare parts to service grounded aircraft.

He said, “Our aircraft require spare parts from time to time. Since most of these spare parts are not available here, we need to look   inward.”

The #BringBackOurGirls spokesman, Abdullahi Abdullahi, declined to comment on the air force statement that it had no intelligence on the Chibok girls.

“We don’t have any comment for now,” Abdullahi said on Sunday.

The group and parents of the abducted girls will, however, march to the Presidential Villa today (Monday).

The #BringBackOurGirls movement had, in a statement on Thursday, said it would commence street marches to the Presidential Villa from Monday (today), as part of measures to compel the Federal Government and the global community to take action to ‘‘rescue the 219 Chibok schoolgirls.’’

The group stated that it would also engage the media and other critical stakeholders, including international organisations and statesmen.

The BBOG, in a reminder to journalists on Sunday, explained that the planned march followed the lukewarm response from the government to the video of the girls that was released last week by Boko Haram.

“Areas to be covered during the period of engagement include the #ChibokGirls, the humanitarian crisis in the North-East, corruption in the disbursement of relief materials to Internally Displaced Persons camps and the arms deal saga,” the group stated.

Meanwhile, a civil rights movement, Coalition Against Terrorism and Extremism, has demanded that Ahmed Salkida, Aisha Wakil and Ahmed Bolori, who were recently declared wanted by the military authorities, should assist in securing the release of the Chibok girls.

The organisation also appealed to the #Bring Back Our Girls team to direct its protests against Salkida, Wakil and Bolori.

Speaking in Abuja on Sunday, the National Coordinator of CATE, Gabriel Onoja, said  the three personalities named by the military possibly knew more about Boko Haram than the security agencies.

Onoja said, “We are appealing to the trio of Salkida, Wakil and Bolori and other persons with links with Boko Haram to prevail on the abductors of these girls to release them unconditionally.’’