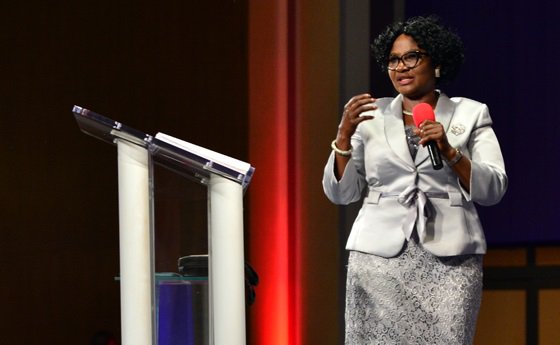 Senior Pastor of the Family Worship Centre, FWC, in Abuja, Sarah Omakwu, has reacted to the lingering killings of Nigerians by suspected Fulani herdsmen.

Omakwu said it was sad that the government in power had decided to turn its back on its citizens being slaughtered like animals when it had the power to quench the ongoing genocide.

Irked by the worrisome development, the outspoken cleric said it was high time Nigerians removed the current government just the way they did to Goodluck Jonathan in 2015.

In a video shared on her Youtube page, the FWC leader called on every Nigerian to get a voter’s card ahead of the 2019 general elections.

“But because it is not your family members, you don’t care much. The truth of the matter is that we have not done what we ought to have done. If all these that are happening in Nigeria are not making you sad, then something must be wrong with you.

“It is so unfortunate that there had been series of killings by this Fulani herdsmen and I don’t see our leaders there.

“When there is tornado or any disaster in America, you see the president there that same day or the following morning.

“I wonder if we have leaders in Nigeria. Why are we being slaughtered like chickens and nobody is talking.

“If I hadn’t seen this government act somewhere else I would be quiet, but I had seen the mayhem that was going on in Zaria and they quenched.

“But I see the Operation Python kill young men fighting for the cause of Biafra in Umuahia. But there is not even operation fly or cockroach in Southern Kaduna or Benue? Something is not fair.

“I believe everyone has the God’s given right to serve whatever he wants.

“I don’t regret seeking for a change because the mayhem that was going on during the last regime was massive I know many Nigerians would forget, but I won’t forget.

“I feel sad that my vote has contributed to the death of somebody.

“The Biafra agitators didn’t kill anybody but they were wasted and stopped within a twinkling of an eye.

“God created the Muslim, Christian and the atheist, and as such, nobody has the right to take anybody’s life.

“We voted for this person because of trust. Like I said last year, I would rather have corruption than to have people die. Let them steal the money but let poor live their poor lives and die at the appointed time.

“Not that corruption is a good choice but if it comes to worst, let corruption swallow this country and let people live.

“You remember in 2015 general elections, nobody thought the APC was going to win, considering the money the PDP pumped in.

“I had decided that I am not going to vote but with this killing, I will vote. The same way the PDP was removed from power. If we could change PDP, we could change APC or whoever.
“In the next one month, go and get your PVC, if you don’t the blood of anybody killed in the future would be on your head.”