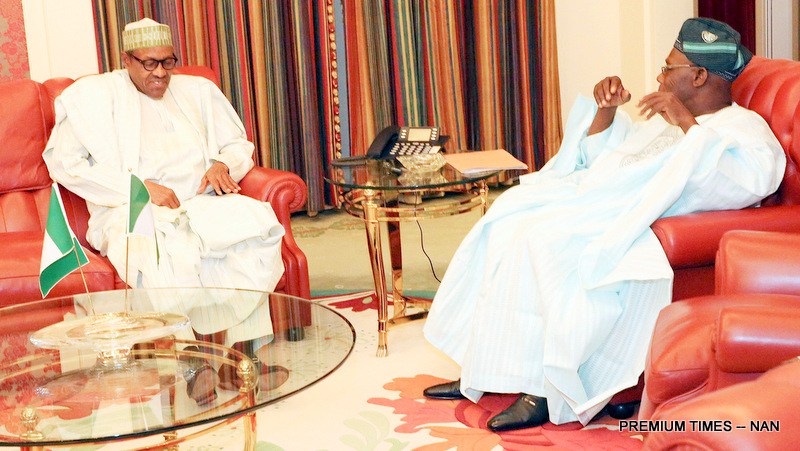 Mr. Sani, a member of the All Progressives Congress, said the president should emulate Nelson Mandela of South Africa, and bow out while the ovation is loudest.

The senator was reacting to a letter by the former head of state critiquing the present administration of Mr. Buhari.

Mr. Obasanjo, in a special press statement entitled, “The Way Out: A Clarion Call for Coalition for Nigeria Movement” said Mr Buhari has performed far below expectation and should honourably “dismount from the horse” to join the league of the country’s former leaders whose “experience, influence, wisdom and outreach can be deployed on the side line for the good of the country.”

“President Buhari is a man of impeccable character and a moral as well as a political leader but he deserves the truth about his grey areas, his weaknesses and his apparent failures,” Mr. Sani noted in a statement on Wednesday.

“President Buhari must free himself from the slippery slates of political choristers and drummers. He should take a dignified bow.

“Those who equate Buhari to Mandela or those who believe and agree that Buhari is our Mandela, then he should be a Mandela.

He added that the president should rather work towards identifying a fitting replacement than seek re-election.

“President Buhari should lead a process of selecting a new leader with fresh and progressive ideas and experience capable of leading our nation to the next level.”

Noting that Mr. Obasanjo’s letter is his opinion, he said the views advanced by the former president remains the views of the majority in the ruling class. He added that the ‘truth’ is better than ‘deceptions’ currently being availed President Buhari.

“Former President Olusegun verdict on the Buhari Administration remains his personal opinion which he is entitled to but also had the courage, the principle and the confidence to voice it out,” Mr. Sani said.

“Obasanjo’s views reflects and represent the views of many members of the political ruling establishment but who simply lacks the courage to speak the truth to power, out of fear of political consequences.

“There exist a regime and climate of fear among the ruling political establishment; the views expressed before the president is a polar difference and distant from the views they express behind the president.

“The bitterness of Obasanjo’s truth will heal the president better than the corrosive deception of the political Pilgrims to the villa.

He advised Nigerians not to discard the contents of the letter while advising President Buhari to heed the advice.

“Those who celebrated Obasanjo when he called National Assembly members unarmed robbers should not demonize him when he calls the knights and Courtiers of the President names,” the senator said.

“Obasanjo’s letter is a truth packaged in Dynamite that must not be ignored or disposed recklessly.

“The ship of the Nigerian state is staggering to a halt; the nation is politically divided along ethnic and religious lines. President needs to eavesdrop on his friends to get their inner views.

“President Buhari cannot get the truth from psycophants, favour seekers, patented friends of power and people whose political survival and future is dependent on his continued stay in office even is to the detriment of his integrity or moral seat in history.”