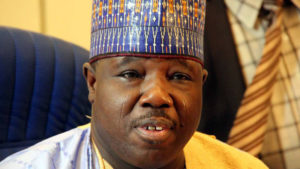 A former Minister of Aviation and a member of the Peoples Democratic Party, Femi Fani-Kayode on Wednesday attacked the factional chairman of the PDP, Ali Modu Sheriff.

Mr. Fani-Kayode’s attack, which he published on Facebook and Twitter, came few hours after the PDP suspended its national convention for a second time within four months, after police sealed the venue following a court order secured by Mr. Sheriff.

The party, during the suspended convention, extended the tenure of the Ahmed Makarfi caretaker committee by one year, to give it time to settle all the legal disputes before a fresh convention.

The attack from Mr. Fani-Kayode mirrors a growing frustration and anger among PDP members against Mr. Sheriff, whom they accuse of being used by the ruling All Progressives Congress to destabilize the opposition party.

“The PDP Ministers Forum rejected him as did the PDP Board of Trustees but the governors would not listen. Now we have been vindicated because everything that we said would happen has come to pass,” Mr. Fani-Kayode said.

Mr. Fani-Kayode kicked against the suggestion from a fellow PDP member and a former presidential spokesman, Doyin Okupe, that the faction of the party led by the former governor of Kaduna State, Mr. Makarfi, should negotiate with Mr. Sheriff.

“There can be no fellowship between light and darkness even in politics,” the former minister said. “You cannot negotiate with a narcissistic megalomaniac who wants your head to be cut off and served to him on a silver platter.

“Sheriff is working for Buhari to destroy the PDP and he has almost succeeded in his mission.”

The former minister, who described Mr. Sheriff as PDP’s biggest mistake after the party conceded power to the APC, said the best approach to the crisis was for PDP to continue to fight Sheriff in court and, if necessary, form a new party, and then leave the “the carcass of the old PDP” for him (Sheriff).

“Very few people will stay with him because carcasses tend to stink and because he is the quintessential plague. After some time, even his most diehard supporters will get sick of him and abandon him.

“Finally let us remember the following. We must never attempt to appease a tyrant: it encourages him in his tyranny and it gives him pleasure. To the bully, compromise is seen as nothing more than weakness.”