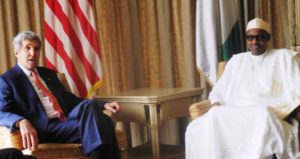 The United States, U.S Secretary of State, John Kerry, is expected to visit Nigeria on August 23 to discuss his country’s cooperation with Nigeria over Boko Haram, economy and human rights issues.

According to a statement issued by the Information Office of the U.S Embassy in Abuja on Friday, Kerry would hold meetings with President Muhammadu Buhari and Northern Governors.

It stated that the Secretary will travel to Sokoto and Abuja between August 23 to 24.

The statement reads, “Kerry will meet with President Muhammadu Buhari to discuss counter terrorism efforts, the Nigerian economy, the fight against corruption and human rights issues.

“In Sokoto, he will deliver a speech on the importance of resilient communities and religious tolerance in countering violent extremism.

“In Abuja, the Secretary will meet with a group of adolescent girls working to change community perceptions that devalue the role of girls in society.

“He will also meet with northern governors and religious leaders.”

The embassy disclosed that Kerry would travel to Nairobi a day earlier to meet with President Uhuru Kenyatta to discuss regional security issues and counter terrorism cooperation, as well as bilateral issues.

The statement said the secretary would also meet with Kenyan Foreign Minister, Amina Mohamed and other regional foreign ministers to discuss key challenges in East Africa.

It said key challenges in East Africa included the prospects for resumption of a political process in South Sudan and support to Somalia’s political transition and ongoing fight against al-Shabaab.

The statement explained that the secretary would have the opportunity of meeting with participants of the Young African Leaders Initiative and the Mandela Washington Fellows programmes during the visit.

According to it, Kerry will travel to Jeddah from Aug. 24 to 25 for a series of meetings with senior Saudi leaders.

It said the series of meetings would include his counterparts from the Gulf Cooperation Council, the UK and the UN Special Envoy for Yemen.

The U.S embassy further disclosed that the secretary’s discussion would focus on the ongoing conflict in Yemen and efforts to restore peace and stability.