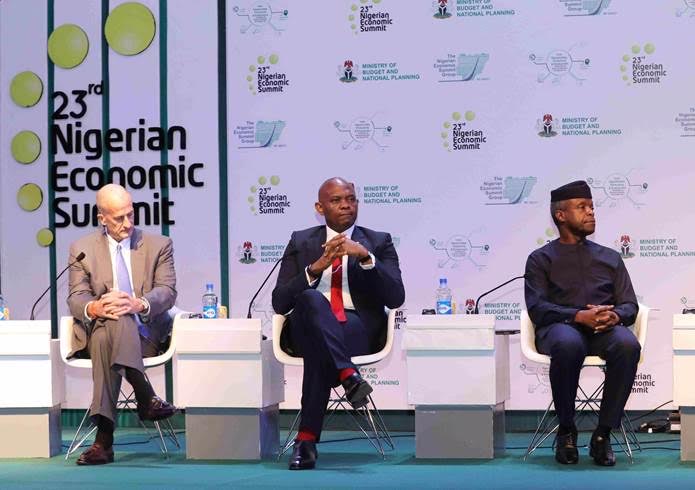 The Chairman of African proprietary investment company, Heirs Holdings, Tony O. Elumelu, CON has called on the government to prioritise SMEs, the Creative Sector and access to electricity to drive job creation, inclusive growth and the diversification of the economy. He made this call while speaking on the topic “Opportunities, Productivity and Employment: Actualizing the Economic Recovery and Growth Plan” at the opening plenary of the 23rd Nigerian Economic Summit with Vice President Yemi Osinbajo and Vice Chairman of General Electric, John Rice. Speaking on the topic, Vice President Yemi Osinbajo stated that though the government has put in place policies to drive productivity and ease of doing business in Nigeria, more still needs to be done. He cited the power sector as an area the government has consciously created initiatives to incentivise businesses along the value chain but noted that the sector lacked the right form of investments.

“Even with increasing generating capacity, Tony’s company and some others have obviously improved generation capacity, and generation has improved considerably, but that last mile – distribution, is absolutely important. We need plenty of investment, especially in distribution,” he said. While commending the government on its initiatives and N760billion intervention  in the power sector, Elumelu said that the sector should be market driven to create sustainability.

He urged the government to consider recapitalizing the leveraged DISCO entities in the sector to allow capable and competent investors come in to bail out the struggling ones that are pulling the power sector  back. as these investors are  “If we fix power in Nigeria, we will increase our ease of doing business and make life significantly easier for investors, the SMES and Entrepreneurs we are trying to nurture and indeed, every Nigerian,” he said.

Elumelu also identified the creative sector as having a huge potential and the capability to create millions of jobs if the government addresses its some of its critical challenges such as piracy and intellectual rights that will enable the sector flourish. Addressing the urgent need to prioritise SMEs, Elumelu noted that the country desperately needed a mechanism for job creation to address inclusiveness and sustainable development.

“SMEs are the engine of growth. When they succeed, they recruit, they train people and when the likes of GE come on board they have a ready ecosystem and pipeline of ‎supply chain players that will support what they are doing. To get it right we need to continue to prioritise our SMEs and improve the environment for SMEs to succeed,” Elumelu said.

The Vice Chairman of General Electric (GE), John Rice, responded to the need for localisation of the       economy, urging the government to focus on improving infrastructure and the speed of government  bureaucracy to attract and retain foreign investors and partners.

“The government needs to begin to measure itself on speed as it begins to implement its reforms,” he said.   Elumelu, who is also the Founder of The Tony Elumelu Foundation, has been a prominent advocate for an entrepreneurially and private sector-led economy as the key to unlocking growth and development. His Foundation has committed $100million to mentor, train and invest in 10,000 African SMEs over a 10-year period with 3,000 entrepreneurs incubated so far.