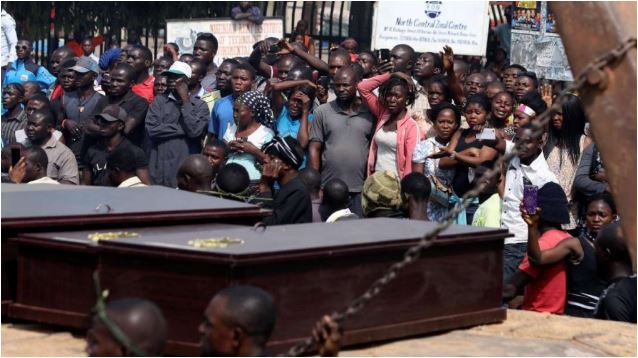 There is tension in Makurdi, the Benue State capital, as the two Catholic priests and 17 parishioners slain by suspected herdsmen are scheduled for burial today (Tuesday).

This was just as the Catholic Bishops’ Conference of Nigeria had directed all Catholic faithful across the country to embark on a peaceful and prayerful protest, tagged, ‘March for Life,’ on Tuesday.

Catholic Church members were directed to be dressed in “all Catholic society groups, apostolate, Bishop’s installation or parish uniforms.”

Those who do not have any of those were advised to be dressed in a white top while “priests and religious shall be in cassock and habits.”

“We should all come with our rosaries and a candlestick each,” the directive by the CBCN added.

The 19 victims of the attack are to be given a mass burial today at the Ayati pilgrim site near Ikpayongo in Gwer East Local Government Area of the state.

One of our correspondents, who went round the town on Monday, reported the presence of security men and the patrol of police around major roads of Makurdi.

At the state secretariat and Wurukum market along Gboko Road in the capital city, people were seen in groups discussing the burial.

A resident of Makurdi town at Wurukum market, who identified herself simply as Dooshima, told   The PUNCH that she had instructed her children to remain indoors for fear of any eventuality.

“Even if there is no work-free day, I have instructed my children to remain indoors, because hoodlums may use the opportunity to cause mayhem, but I think that the decision of the government to declare tomorrow a work-free day is a good step,” the resident said.

However, the Commissioner of Police in Benue State, Fatai Owoseni, told The PUNCH that his men had cordoned off the burial site and communities around the area as well as Makurdi township.

He urged residents not to panic as adequate security had been provided in and around the burial site as well as the capital city.

“The state Director of the DSS and I just left the burial site; our men are already there rendering skeletal service. I can assure you that there will not be any security threat because adequate security has been provided in and around the area.

“There is also the presence of security men within the town,” Owoseni said on Monday.

Meanwhile, the Catholic Archdiocese of Benin, Edo State, said on Monday that Catholic faithful in the state would on Tuesday stage a peaceful protest in compliance with the directive by the Catholic Bishops’ Conference of Nigeria.

The Catholic Archdiocese of Benin disclosed this in a statement signed by its Archbishop, Most Revd. Augustine Akubeze, and Chancellor, Very Revd. Fr. Michael Oyanoafor, on Monday.

It said that the clergy and lay faithful would march in solidarity with the people of Benue State as they mourn the death of their compatriots, especially those who lost their lives in the April 24 attack in the Gwer East Local Government Area of the state.

Also, the Catholic Diocese of Osogbo, Osun State, in a statement signed by Most Rev. John Oyejola, on Monday, said that it was set for Tuesday’s protest.

Also, the Catholic Diocese of Lagos said in a statement on Monday that it was ready for the “solemn, peaceful demonstration against killings in Nigeria.”

In the statement signed by the Archbishop of Lagos, Most Rev. Alfred Martins, the Lagos diocese said the procession would begin from St. Leo’s Catholic Church, Ikeja with the Governor’s Office, Alausa, Ikeja as its destination.