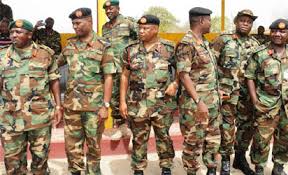 The Human Rights Watch on Wednesday stated that hundreds of Shi’ite Muslims were killed by soldiers and buried in mass graves in an “unjustified” attack earlier this month.

The New York-based rights watchdog claimed in a statement that soldiers killed “at least 300” members of the radical Islamic Movement of Nigeria earlier in December when they fired “without any provocation.”

It claimed that witnesses said that the soldiers disposed of hundreds of bodies by throwing them in mass graves, making it difficult for the organisation to establish an accurate death toll.

The violence erupted on December 12 when members of the Shi’ite group erected a makeshift roadblock during a religious procession, blocking the path of a Nigerian army chief.

“It is almost impossible to see how a roadblock by angry young men could justify the killings of hundreds of people,” Africa director at HRW, Daniel Bekele, said.

“At best it was a brutal overreaction and at worst it was a planned attack on the minority Shi’ite group,” he added.

The Nigerian army, which has not released an official death toll, denied HRW’s charges.

“The allegations are not true,” said Nigerian army spokesperson, Sani Usman, to AFP.

“It is therefore presumptuous and clearly out of context for anyone to make such an unsubstantiated allegations or comments.

“The incident between the Nigerian army and the Islamic Movement of Nigeria has been reported to the appropriate agencies who are investigating the issue,” Usman said.

Last week, the Federal Government set up a judicial commission to investigate the deaths.

The Nigerian army had accused the Iran-backed sect of “a deliberate attempt to assassinate” the Chief of Army Staff, Lt. Gen. Tukur Buratai, releasing footage of the crowd hurling stones at his military convoy.

The allegations come amid fears that the violent clashes between the Shi’ite group and army will unleash a new Islamic threat on a country still battling Boko Haram militants.

IMN leader Ibrahim Zakzaky, the charismatic founder of the group, was seriously wounded and remains in police custody, while his deputy was killed in the army crackdown.