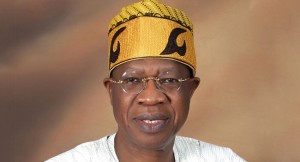 The Federal Government has said the military has met the deadline set for it by President Muhammadu Buhari to wipe out terrorism by the end of December, 2015.

Minister of Information and Culture, Alhaji Lai Mohammed, said this in an interactive session with senior newsmen in Lagos on Wednesday, according to a statement made available to our correspondent in Abuja.

Insisting that the Boko Haram insurgents had largely been defeated, Mohammed added that the December 31 deadline, given to the military by the President to defeat the insurgent, had been met.

He said, “Today, I can report to you that the entire 70-plus kilometre stretch (territories) from Maiduguri to Bama and all the way to Banki (which leads to Cameroon and the Central African Republic) are in the hands of our gallant troops.

“Our soldiers’ presence can be felt every few metres along the road that skirts the Sambisa Forest. At a point along that road, we were just about two kilometres to the Sambisa Forest, which is continuously being pounded by our dedicated and patriotic military.

“That brings me to the issue of the December 31, 2015 deadline issued by President Muhammadu Buhari to our military to defeat the terrorists. Based on what I saw during my trip to the liberated areas of Borno State (which by the way is the epicentre of the war) and the briefings I received from the Chief of Defence Staff and the Theatre Commander, I can confidently inform you that our gallant military has largely met that deadline.

He added, “I can hear you saying to yourself, ‘but the terrorists are still carrying out suicide bombings and killing people’. My response to that is that such is the nature of insurgency anywhere. Unlike a war between two armies, an insurgency never ends with an armistice. Even in countries like Colombia, where insurgency was supposed to have ended decades ago, attacks still happen.

“They have capitalised on the missing part of the war on terrorism: the civilian component. Our military has availed itself creditably. It is our turn, as civilians, to give them our unalloyed support, to realise that what they are fighting is not their war but our war; hence we must own the war.”

The minister, however, stated that despite the achievements of the military in putting the terrorists on the run, insecurity remained Nigeria’s biggest challenge.

Mohammed said security was so central to the current government that Buhari prioritised it as soon as he assumed office as the leader of the country.

He also put the security challenge ahead of the dwindling economy, saying every nation needed an atmosphere of peace to be able to enjoy a good economy.

The minister said, “Undoubtedly, the topmost challenge facing our country today is the issue of security. Important as the economy is, no nation’s economy can thrive in an atmosphere of insecurity. That explains why the welfare and security of the citizenry constitute the basis for the existence of any government, and why it is one of the key policies of this administration.

“The biggest security challenge we face as a nation today is the Boko Haram insurgency that has left thousands dead and injured; displaced over two million people and crippled the North-East, both economically and socially, with a ripple effect that is felt across the nation.

“The Buhari administration hit the ground running in tackling the insurgency; first, relocating the military’s command and control centre to the theatre of war in Maiduguri, raising the morale of the troops through enhanced welfare and the provision of the necessary fighting tools and then rallying sub-regional, regional and global support for the war.”

The minister urged journalists not to give their platforms to the insurgents to publish their propaganda, describing the insurgents as hungry, sick and desperate people, who would clutch at any available straw.

The Tuesday’s night attack brought to three the attacks by the terror sect in less than 24 hours on Nigeria’s neighbours.

Four militants detonated suicide bombs in the Lake Chad area, also overnight, killing three of the attackers but no one else.

Another band attacked a convoy in northern Cameroon on Wednesday, although there were no reported deaths.