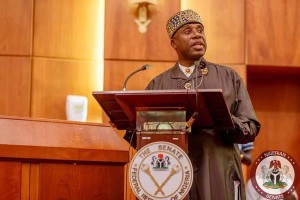 After three postponements, a former Governor of Rivers State and President Muhammadu Buhari’s ministerial nominee, Rotimi Amaechi, was finally screened on Thursday by the Senate but the exercise left the Peoples Democratic Party members of the Senate alleging betrayal.

The opposition senators have also threatened to oppose Amaechi’s confirmation when the time comes.

They said their All Progressives Congress colleagues in the upper legislative chamber betrayed the agreement they had not to screen the ex-Rivers governor given the report of the panel that investigated the petitions against him.

The ethics committee of the Senate was said to have advised that Amaechi screening be left till the end of the cases of alleged corruption he has in court.

One PDP senator, who asked not to be named, said, “We had opened Thursday’s sitting with a closed session, which lasted for 50 minutes to sort out knotty issues relating to the screening of Amaechi.

“During the closed session, Chairman of the Ethics Committee, Senator Samuel Anyanwu, briefed us on the report and indicated that the committee reported that the issue regarding Amaechi’s petition was in court and that the Senate should suspend action on his screening, pending the resolution of the court issues.”

Another senator, who said a similar thing, said the PDP senators were surprised when the Senate President, Bukola Saraki, and the other APC senators started asking Amaechi questions.

The two and others alleged that all the senators at the closed session had agreed that the PDP senators would insist on not having anything to do with Amaechi, while their APC colleagues also agreed that they would only ask the nominee to only “take a bow and go.”

They said they were surprised seeing Saraki and other APC members asking Amaechi questions.

At the screening, which lasted for about 55 minutes, the PDP senators did not ask the nominee any question with the Minority Leader, Godswill Akpabio, saying his members would not participate in the screening of Amaechi until the outcome of his court case.

Akpabio also raised a point of order that no controversial matter be brought before the Senate.

He said, “My point of order is under Order 43. The PDP senators seated here will not have any question for the nominee because we have just received the report of the ethics committee bordering on corruption and all sorts of things from the Senator Anyanwu committee and we have not debated that report at all. So, we have little or nothing to ask the nominee.”

Akpabio then asked his PDP colleagues whether he had spoken their minds and the opposition senators responded in the affirmative.

However the APC senators had pleaded with their PDP counterparts during the closed session to allow Amaechi to be screened while the debate of the report of the ethics committee continued.

The PDP senators were also said to have agreed to the suspension of the debate on the report of the ethics committee only if their APC colleagues would also ask the Rivers nominee to take a bow and go so as not to “cause controversy.”

Amaechi had arrived on the premises of the National Assembly around 10.30am, dressed in Rivers attire. His name was Number One on the order paper, with other nominees. –

The business of the day commenced with the laying of the report of the Senate Committee on Ethics, Privileges and Public Petitions, on the alleged fraud allegation against Amaechi, by Anyanwu. On the directive of the Senate president, Amaechi was led into the chamber moments later by the Senior Special Assistant to the President on National Assembly Matters (Senate), Ita Enang; the National Chairman of the APC, Chief John Odigie-Oyegun; Senator Olorunnimbe Mamora; Governor Rochas Okorocha; Rivers APC governorship candidate, Dakuku Peterside;   Senator Victor Ndoma-Egba and a former Speaker of the House of Representatives, Ghali Umar Na’Abba.

Amaechi explained details of his achievements as Rivers State governor for eight years and     pledged to improve on the relationship between the executive and the legislature.

In a reply to Akpabio’s earlier order, the Senate Leader, Ali Ndume, had raised a point of order under Order 53 (9).

Ndume said, “My position and by the grace of God, as a Senate Leader, I want to guide the Senate properly. The committee report has been laid by the committee that we assigned to do the job of ethics and privileges and the procedure is that after laying the report, we will make copies of that report.

Amaechi was Speaker of the Rivers State House of Assembly before becoming governor in 2007.

The drama of the ex-governor’s screening continued with Akpabio interrupting Ndume and telling Amaechi, “Mr Nominee, the leader has spoken and by implication, the leader is saying that today, the Senate should have a rule that every nominee should bow and go. Maybe the leader did not hear me well, what you (APC senators) are now saying is that you can’t ask questions?”

Ndume also stood up again and said, “Mr chairman, as I said, I raised two orders. One: It is my responsibility as the Majority Leader. Two, on the other order that I raised, the gentleman you see here as a nominee, it’s my responsibility to market him here before the Senate.

“It is you people that are given the privilege to ask questions and you said….”

Calling his colleagues “you people” led to an uproar and Saraki had to apologise on behalf of Ndume and asked the PDP senators to accord Amaechi the usual courtesies of former lawmakers who had appeared before the Senate.

Amaechi was thereafter asked questions on the challenges in the Niger Delta; his alleged indictment by the Rivers State Government Commission of Inquiry and his view on corruption.

At this point, Akpabio left the chamber.

Amaechi was again asked further questions by many APC senators before he was asked to take a bow and go.

As part of his answers, he said, “Corruption is very difficult to define. If you are a public officer and you don’t take a bribe, I have never taken a bribe in my life but if they send a girl to you and you sleep with the girl and do her favour, you are corrupt.

“Corruption is a very wide concept. If people are contesting a position and you offer your son, brother or sister an opportunity to hold that position, probably the person is not qualified, you are corrupt. So, it is difficult for me to define corruption.”

He said the APC used anti-corruption to sell the Buhari brand to Nigerians.

“So, we had to get a signpost candidate. The signpost candidate is a man who the Nigerian public has seen as an incorruptible president; that was why the party had to put President Buhari forward. We thought that there was a need to do things differently.

“I thought that as good as the former President (Goodluck Jonathan) might have been, I don’t think he was suitable enough for the growth and development of Nigeria. So, we needed to offer an opportunity to somebody we believe is better than the former President.

Amaechi denied being indicted by the Rivers State Government Commission of Inquiry instituted to investigate his stewardship as the governor for eight years.

He said, “There was nowhere I was indicted (in the judicial panel report). I was born to test my rights and fight for my rights, I was once a student union leader and believe me, if there is one man who does not like corruption, I do not like corruption.

“I came here with a copy of the so-called panel report, there is no where that the panel indicted me, I am ready to tender this report before the Senate. I was ready for the questions on it and I brought the panel report so the Senate can juxtapose it with the White Paper.

“However, because there are challenges, people in Nigerian politics believe that there is the need to compromise and be able to manage yourself around; I will do that but where it clashes with my principles I find it a bit difficult to do what people expect me to do.”

Ameachi stressed the need to diversify the nation’s economy, improve on power supply and invest heavily in agriculture as a means of providing jobs for the youths.

“Government must invest in that regard. We must diversify the economy. Mining is another area that God has blessed us with and we also need to invest in education because some of these people are unemployable.

“We need to invest hugely in education. We did that in Rivers State. For four, five, six years, our budget was highest in education. So, if this happens, we will employ quite a number of workers.”

Amaechi also justified his radical posture when he was the Chairman of the Nigeria Governors’ Forum. He said it was meant to check executive recklessness.

He said, “The governors’ forum started as a check to executive recklessness. The Senate president (Saraki) was the chairman and with other governors who are here today as senators, including Senator (Danjuma) Goje, to make me the chairman of the forum for the first time.

“It happened in Kwara State and we checked the excesses, including the expenditure of the oil subsidy. There is a case in court up till now stopping the Federal Government from drawing money from the account to fund oil subsidy.

“I think that the radical posture of the governors’ forum led to the former president asking me that I had turned the forum into a union, so it’s no longer a governors’ forum, it is now a trade union and all we were doing was to defend the lives of Nigerians and ensured that the money accruable to the country was judiciously utilised.”

Amaechi was greeted with a loud round of applause from his supporters when he emerged from the senate chamber. The supporters were seen rendering solidarity songs.

The other nominees listed for the day were also screened by the senators.