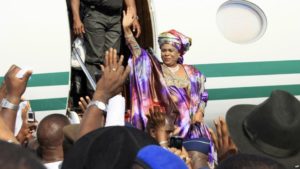 Patience Jonathan, former first lady, has described the Economic and Financial Crimes Commission (EFCC) as “a big thief” for freezing her accounts with Skye Bank containing more than $15million in all.

Mrs. Jonathan is the subject of an EFCC investigation regarding the source of the money but she has continued maintaining her innocence — even though the four individuals representing the companies linked with the alleged laundering have pleaded guilty to the charge in court.

Directors of the companies are domestic workers of Waripamowei Dudafa, Jonathan’s special adviser on domestic affairs.

The former first lady had previously clarified that the $15m was for her foreign medical bills and other private expenses. But responding in an open letter to the EFCC chairman released late Sunday night by her lawyers, FirstLaw Solicitors, she said it would be “counter-productive and inimical to the public interest” if the attorney general of the federation and/or the EFCC heeds the “irresponsible calls” for her arrest and prosecution “based on suspicion”.

On the freezing, her lawyers told Ibrahim Magu: “Sir, instead of strict compliance with the above pattern, as laid down by SECTION 36(6)(a) & (b) of the 1999 Constitution (as amended), the EFCC went after our Client’s money by ordering a freeze of her accounts. With all due respect, the EFCC is a BIG THIEF!”

1. By virtue of the Fundamental Rights (Enforcement Procedure) Rules 2009, we are Solicitors to HER EXCELLENCY, MRS. PATIENCE IBIFAKA GOODLUCK JONATHAN, the wife to the immediate past President of the Federal Republic of Nigeria, HIS EXCELLENCY, DR. GOODLUCK EBELE JONATHAN, GCFR. We shall hereinafter, refer to Mrs. Patience Goodluck Jonathan as “OUR CLIENT.”

2. Our Client is a respected senior citizen of international repute, a retired Permanent Secretary and the immediate past First Lady of the Federal Republic of Nigeria. Our Client is a law-abiding citizen who has never or at all been the subject of any criminal and/or financial investigation, whether at home or abroad. Accordingly, she has not been found guilty of any criminal conduct throughout a sparkling public service career spanning over 35 years.

3. During the 5 years our Client served as First Lady of the Federal Republic of Nigeria between May, 2010 and May, 2015; she was the Initiator/Founder of the A. ARUERA WOMEN FOUNDATION as well as the WOMEN FOR CHANGE INITIATIVE; both of which Non-Governmental Organisations (NGOs) substantially contributed to the 35 per cent affirmative action for women in the country. Our Client is the recipient of numerous local and international awards in recognition of her untiring commitment towards uplifting the living standard of women, children and the aged in Nigeria.

4. Sir, it is against this sterling and meritorious background of our Client that we most respectfully, write to draw your attention to the numerous breaches of the 1999 Constitution (as amended) and the African Charter on Human and Peoples Rights (Ratification and Enforcement) Act 2004 committed by the Economic and Financial Crimes Commission (EFCC) in cause of the Commission’s illegal and unlawful investigation of our Client for alleged money laundering. These investigations have reportedly led to the freeze of our Client’s accounts and led to untold consequences to our Client’s health and wellbeing.

5. Firstly, the EFCC must realize that the ECONOMIC AND FINANCIAL CRIMES COMMISSION (ESTABLISHMENT) ACT 2004 is inferior in content and quality to both the 1999 CONSTITUTION OF THE FEDERAL REPUBLIC OF NIGERIA (AS AMENDED) and THE AFRICAN CHARTER ON HUMAN AND PEOPLES RIGHTS 2004.

7. However, we note, with regret, that in the current matter involving the curious and bizarre investigation of our esteemed Client, the EFCC under your watch has not only undermined the 1999 Constitution (as amended) and the African Charter on Human and Peoples Rights; the Commission has actually conducted itself in a most desperate, despicable and arrogant manner. This is rather unfortunate.

8. Sir, one of the cardinal principles enshrined in both Nigerian and African jurisprudence, is that of the presumption of innocence which is guaranteed to all citizens, including our Client.

9. Consequently, the SPECIAL POWERS of the Commission as defined by SECTION 7(1) & (2) of the EFCC ACT 2004 to, among others, “cause investigations to be conducted into the properties of any person if it appears to the Commission that the person’s life style and extent of the properties are not justified by his source of income,” is inconsistent with and contrary to the mandatory requirement of SECTION 36(6)(a) & (b) of the 1999 Constitution (as amended), which states thus:
“Every person who is charged with a criminal offence shall be entitled to – (a) be informed promptly in the language that he understands and in detail of the nature of the offence; (b) be given adequate time and facilities for the preparation of his defence;”

10. The necessary implication or import of SECTION 36(6)(a) & (b) of the 1999 Constitution (as amended) is that the EFCC’s so-called power to arbitrarily and unlawfully investigate our esteemed Client and thereby, freeze her accounts with total sum in excess of FIFTEEN MILLION US DOLLARS which are domiciled with SKYE BANK PLC is NOT ABSOLUTE.

11. Sir, it is our Client’s brief that there is no formal criminal complaint of economic and financial crime as defined by the EFCC ACT 2004 written by any person or institution against her which warranted the EFCC to freeze her accounts.

12. It is also our Client’s brief that the EFCC failed to obtain a Court Order as required by SECTION 34 of the EFCC ACT before her accounts were frozen.

13. It is our Client’s further brief that, up until the writing of this Open Letter, she has not received any formal invitation to appear before the Commission for questioning; whereas her accounts domiciled with SKYE BANK PLC have since been frozen by the Commission without recourse to her.

14. Sir, the argument put forward by the Commission in the public domain that, “investigations are ongoing…Mrs. Patience Jonathan shall be invited in due course,” are not only vexatious and provocative. They constitute an outright violation and rape of the fundamental right to fair hearing and ownership of property as guaranteed to our Client by the 1999 Constitution (as amended) and the African Charter on Human and Peoples Rights 2004.

15. Indeed, SECTION 36(6)(a) & (b) of the 1999 Constitution (as amended), contains or laid down a sequence or pattern of commencement of investigation which MUST BE FOLLOWED STRICTLY, to wit:
a. Persons charged with a criminal offence must be informed in the language they understand and in detail of the nature of the offence;
b. Such persons must be given adequate time and facilities for the preparation of their defence; etc

16. Sir, instead of strict compliance with the above pattern, as laid down by SECTION 36(6)(a) & (b) of the 1999 Constitution (as amended), the EFCC went after our Client’s money by ordering a freeze of her accounts. With all due respect, the EFCC is a BIG THIEF!

17. We are very much aware of numerous instances where EFCC used strong-arm tactics to dispossess hard working Nigerians of their legitimately earned money; only to turn around to brazenly and shamelessly loot the recovered loot. This is one of such unfortunate instances. Clearly, it is a failed politically-motivated attempt by the EFCC to steal our Client’s money using the cover of the present political climate.

18. We are sufficiently convinced that prebendal politics of the sort that smears the image and reputation of former public office holders, together with that of members of their families – which automatically, distracts from governance and slows down the nation’s pace of development – is one of the major reasons for the persistent and unrelenting politically-motivated attacks on our Client who is extremely popular with Nigerian women, children and the aged.

19. We have rightly observed that each time a new Government was sworn into office, political jobbers such as the EFCC promptly mobilized themselves to throw mud, blackmail and/or otherwise label members of the immediate past Government; all in a desperate bid to accomplish or satisfy narrow and base political interests to the detriment of the entire country. This disturbing familiar pattern of unjustifiable, bankrupt and hollow harassment of the nation’s former leaders is deplorable.

20. Our Client has unfortunately, come under the vice grip and stranglehold of the cabal of political jobbers who would not allow her concentrate on her private life in retirement. Ironically, our Client’s most virulent critics and traducers come from the human rights community in Nigeria which benefited immensely from her husband’s fairly commendable human rights record, while he served as President.

22. For the avoidance of doubt, it shall be counter-productive and inimical to the public interest if the Attorney General of the Federation and/or the EFCC heeded the irresponsible calls to commence the arrest and prosecution of our Client based on suspicion. If they did otherwise, they shall be violating the extant provision of SECTION 174(3) of the 1999 Constitution (as amended) which clearly prohibits criminal proceedings that were not in the public interest. Besides, suspicion; no matter how strong it may seem; cannot ground a conviction.

23. We hereby categorically and emphatically state that, HER EXCELLENCY, MRS. PATIENCE IBIFAKA GOODLUCK JONATHAN SHOULD BE LEFT ALONE!

24. Furthermore, there is no established legal or political precedent for what the EFCC is currently doing to our Client. How many former First Ladies in Nigeria have received the Patience Goodluck Jonathan Treatment (PGJT) to have warranted the EFCC to engage in the effrontery to freeze our Client’s accounts and subject her to public opprobrium, ridicule and disgrace? This nonsense must stop forthwith!

25. Consequently, we urge the EFCC to de-freeze our Client’s accounts WITHIN 14 DAYS from today, September 18, 2016 and tender a public apology to our Client.

26. TAKE NOTICE; AND NOTICE IS HEREBY GIVEN that if the EFCC fails, refuses and/or neglects to comply accordingly, we shall file an action at the AFRICAN COMMISSION ON HUMAN AND PEOPLES RIGHTS at The Gambia demanding FIVE BILLION NAIRA in exemplary and punitive damages.