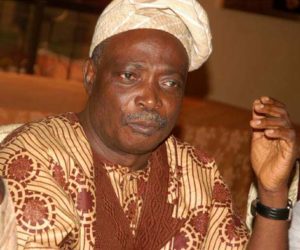 Former Governor of Oyo State, Rashidi Ladoja, has condemned the postponement of the governorship election in Edo State.

Ladoja said the development was a clear sign that the All Progressives Congress, APC, was afraid of going into the election earlier fixed for September 10.

He said the party muscled the Independent National Electoral Commission, INEC, to shift the poll even when the commission had expressed readiness to go ahead.

Insisting that President Muhammadu Buhari must lead his change mantra by example, Ladoja decried that the rescheduling cost taxpayers billions.

His words: “Look at what INEC said about the change in date in Edo State election; they said it is colossal waste.”

“Nobody has convinced us about the postponement; they on cited ‘security reasons’. Meanwhile, billions of naira have gone down the drain. We are so wasteful.

”I am not in their party. My party has no candidate in Edo but I just know that they did is wrong.

“They had fixed this date a long time ago. They first said it was shifted because of WAEC, but the date the election has been shifted to again also has WAEC exams. Are you now going to ask WAEC to change the date also?

“We are still playing games. I am sure that if APC were sure that they will win Edo election, they will not have postponed it.”

editor@lifeandtimesnews.com - November 29, 2022 0
By Uche Amunike The Assistant Director, Media and Publicity of the All Progressives Congress (APC) Presidential Campaign Council (PCC), Biodun Ajiboye has reacted to a viral video...