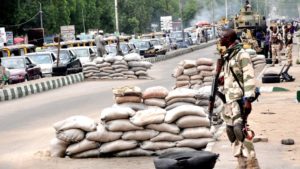 A female suicide bomber was on Sunday killed near a military checkpoint in Dikwa local government area of Borno State, when soldiers opened fire on her, the army has said.

The bomber, according to an army statement, pretended she was a visitor coming from Monguno town to check on her parents in Dikwa.

Her true intentions were exposed when soldiers on guard recalled that she had arrived from the wrong direction.

The spokesman of the Nigeria Army, Sani Usman, a colonel, said the spontaneous judgment of the troops who fired paid off when suddenly the lady blew up in loud explosion after she was shot at.

The explosion injured three soldiers at the checkpoint.

According to Colonel Usman, “troops sensing the direction of approach was suspicious and abnormal, fired a shot at her and the sentry gallant sentry was proven right as she was carrying a Person Borne Improvised Explosive Device (PBIED) which exploded with a loud bang, killing her instantly and causing minor injury on 2 soldiers and a Civilian JTF assisting them”.

He said the three injured personnel had resumed duties after treatment.

He said the incident had proven that “there are a few of the remnants of the Boko Haram terrorists that are determined to carry out criminal acts to create panic and insecurity in some areas”.