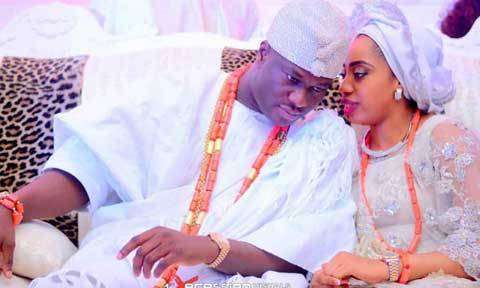 The Ooni of Ife, Adeyeye Enitan Ogunwusi has denied promising marriage to one Enitan Odunlami and opined it a case of mistaken identity. He also sympathizes with her.

In a statement dated October 24, 2018, the Ooni of Ife, who recently married Olori Naomi Shilekunola Moronke Oluwaseyi, denied all allegations through his Director for media & public affairs, Moses Olafare.

According to Instablog9ja, one Elizabeth Odunlami had alleged on Monday, October 22, 2018, that the Ooni met her in the United States, used her name for business and promised her marriage over the new Olori, Naomi.

Ooni’s press release reads, “While we sympathise with Miss Elizabeth Odunlami (if the identity is real) who obviously has become a victim of a fraudulent act perpetrated by a scammer disguising to be Ooni Ogunwusi, we find it pertinent to debunk this sacrilegious and unfounded allegation which is not unlikely to be another calculated ploy adopted by some unprovoked detractors using psseudo-identities.

“Good members of the public especially ladies are hereby cautioned against communicating with anyone presenting himself to be the Ooni Ogunwusi and swiftly report such a matter or person to the relevant security agencies,” the release said.”

On October 18, 2018, the Ooni of Ife had announced that he had found love again. ““It is the beginning of your wisdom on this throne of Oduduwa. You are welcome home my beautiful and adorable queen. #OoniOfIfe #Otisese” he wrote on Twitter.

The king’s new bride, Shilekunola Moronke Oluwaseyi Naomi is an evangelist/prophetess and she is the minister in charge of En-Herald Ministries, an Inter denominational Christian ministry based in Akure, Ondo state.