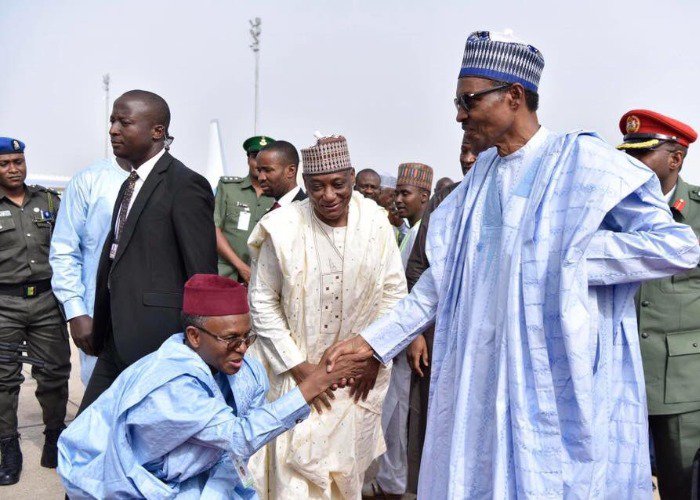 The presidency and the Kaduna State governor, Nasir El-Rufai has come under attack over a picture of him kneeling to greet President Muhammadu Buhari on Thursday.

The picture was shared by Buhari’s Personal Assistant on New Media, Ahmad Bashir on his twitter page during Buhari’s visit to Kaduna to commission the surveillance aircraft, a Made-in-Nigeria project called NAFSA Eagle by the Nigeria Airforce.

Bashir Ahmad alongside the picture described El-Rufai’s gesture to the president as a sign of respect.

However, some Nigerians seem not to see it that way, as they accused El-Rufai of eye service and hypocrisy, while others recalled how he also bowed for former Vice president Atiku Abubakar yet turned his back against him.

Recall that former presidential spokesperson, Reno Omokri sometime ago posted an old photo, reminding Governor Nasir Elrufai of how he knelt, begging Atiku Abubakar when he was the Vice President.

Here are some comments from Nigerians:

@kalahari “El Rufai has no shame

@sanusiluwan “Respect or Hypocrisy? This was the same man who insulted Buhari when he was not the president! Was Buhari not old enough to be respected then?

@nwakuc This is not respect this is idiocy, illiteracy, backwardness and outright nonesense.

@benkpesah “Pretender! That was the same he bowed for OBJ but now talks to him any how.

@obidikwe “Treacherous snake. Didn’t he rush to @T_Bakare ‘s church immediately that one said he was contesting election. I wonder why he had to squat; he was already on d ground standing. Short Man

@karyopope If u consider this as a sign of respect then you are wrong. Check his records he does the same thing to his previous “Ogas”

@nsajo “The same man that said Buhari is perpetually unelectable, and so out of touch. Simply because he thinks Buhari holds the key to his political ambition now has decided to lick Baba a** and you call it respect

@onukwube “Clowns! He did same with Atiku, GEJ and OBJ This malam is the most volatile politician i have seen in my life He’s an unstable element !

@hmu “looks like an ass lick combined with eye service. plus i am loyal, as indicated by my gate security.