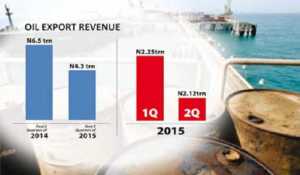 The value of Nigeria’s export of crude oil dropped by N2.2 trillion in the first half of 2015, a comparison of data released by the National Bureau of Statistics (NBS) has shown.
Analysis of the NBS Foreign Trade Statistics for the first six-months of 2014 and 2015 showed that crude oil exports for the first half of 2015 reduced to N4.3 trillion from N6.5 trillion recorded in the first half of 2014, representing a 33% decline in crude export value  for the period.
The reason for the decline in oil export in the first half of 2015 could be attributed to the slump in oil price within the period.
The international price per barrel of oil was around $114 in early 2014 but prices fell sharply in the fourth quarter of 2014.Though it recovered slightly in late January, early February and March trading $58.80 per barrel, the price of oil slipped below $50  from June 2015 and have since been hovering just above six-year lows for the past week.
Analysis of the NBS Foreign Trade Statistics for the First (Q1) and Second (Q2) quarters of 2015 released recently showed that the country earned N2.25 trillion in Q1 and N2.12 trillion in Q2 from export of crude.
A comparison of the quarter figures showed that the value of oil exports also dropped by N129.7 billion in Q2 2015.
The NBS Foreign Trade Statistics also showed that the country earned N260bn from export of liquefied natural gas for the Second Quarter of 2015 down by N45bn from the N306bn it earned from liquefied natural gas export in Q1.
Further analysis also revealed that India ranked the highest importer of Nigerian crude oil for the first half of 2015 with a total value of N733bn crude oil import.
India imported from Nigeria crude oil valued at N381bn in Q1 and N352bn in Q2. The value of crude oil export to the country dropped by N29bn in Q2, the data also showed.
The NBS data for Q2 noted that the structure of the Nigeria’s exports is still dominated by crude oil, which contributed 73.7% to the value of total domestic exports in Q2 of 2015 compared to 69.7% it contributed in the opening quarter of 2015 (Q1).
Natural liquefied gas was the product with the second greatest export value, recording N260.7 billion or 9.1% of the total export value for Q2, the report noted.