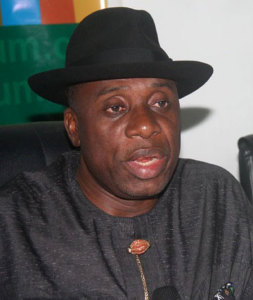 The Economic and Financial Crimes Commission (EFCC) has begun a probe into the administration of the former governor of Rivers state, Rotimi Amaechi.

The probe is based on a petition by a Port Harcourt-based group, the Integrity Group, which on July 29 wrote to the EFCC detailing three instances of alleged corruption, graft and abuse of office under Amaechi’s government.

The first allegation was that Rivers state electric power projects were sold and the proceeds converted to other uses through payments amounting to N60 billion to three companies all located at Trans Amadi, Port Harcourt. The alleged transfers, made in US dollars, occurred within a space of one week between December 1 and 8, 2014.

The second instance of alleged corruption was that the proposed Karibi Whyte Specialist Hospital in Port Harcourt was a failed contract, which cost the state a massive N4.63 billion in what the petitioners described as questionable circumstances.

Thirdly, the group alleged that Amaechi as governor appointed a firm of tax consultants, which was given a relatively exorbitant fee of 12 per cent of taxes collected on a much lower monthly collection target of N2.5 billion, even as the Rivers State Internal Revenue Service was raking in about N7.5 billion monthly at five per cent administrative cost, as prescribed by law.

The consultants were said to have collected over N1.5 billion in fees within weeks of their being engaged by Amaechi’s government.

In response to the group’s petition, the EFFC, with three separate letters titled, “Investigation Activities”, dated August 13, 2015, and signed by the head of economic governance, Olufunke Adetayo-Ogunbode, began a detailed investigation of Amaechi’s dealings as alleged by the petitioners.

Two of the letters with reference numbers CR: 30/EFCC/ABJ/EG/T4/Vol.26/386 and CR: 30/EFCC/ABJ/EG/T4/Vol.26/379, were addressed to the permanent secretary of the state Ministry of Finance, in respect of the sale of the state power projects as well as the Clinoriv Specialist Hospital and Leisure Limited, which was engaged to have constructed the still-born Karibi Whyte Specialist Hospital.

The third letter with reference number CR: 30/EFCC/ABJ/EG/T4/Vol.26/380 was addressed to the state accountant general in respect of the activities of Messrs Collect Nigeria Limited on the collection of internally generated revenue on behalf of the state.

One of the EFCC letters to the permanent secretary,read in part: “The commission is investigating a case of conspiracy, abuse of office and fraud. In view of the above, you are kindly requested to furnish the following: Details of all the assets sold to the NG Power-HPS Limited; total amount received and the account it was paid into; Sales Agreement/Memorandum of Understanding; House of Assembly resolution/approval; investments made from the proceeds if any; documents indicating due process; and any other information that will assist the commission in its investigation.”

On the Karibi Whyte Specialist Hospital and tax consultancy allegation, the EFCC requested the permanent secretary and the state accountant-general to supply certain documents that will assist the commission in its investigation.

According to the commission, the request for specific information in the on-going investigation of the allegations against Amaechi’s government was “made pursuant to Section 38 (1) and (2) of the EFCC (Establishment) Act 2004.”

The judicial commission of inquiry set up by Governor Wike to probe Amaechi started sitting on Monday. Declaring the panel open, the chairman of the commission, Justice George Omereji, said the commission would be fair to all, dismissing fears that it was on a witch-hunt.

At the public sitting of the judicial commission, it was claimed that Amaechi diverted a N3 billion Central Bank of Nigeria (CBN) agriculture loan to fund the 2015 elections.