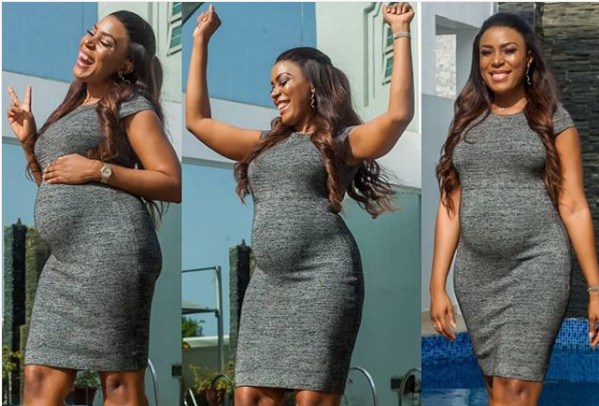 Social media is still buzzing with the news of popular blogger, Linda Ikeji’s pregnancy. Linda broke the news when she debuted a baby bump on Instagram on Sunday. She has also gone on to disclose that she is expecting a baby boy on her blog. She wrote, “So now imagine that in a few months, I will look down at a baby, and it won’t be a neighbor’s child, a friend’s child, a sister’s child, but my own child, my own flesh and blood, carried in my womb. My own son. It’s surreal. I can’t get over it.”

Controversial Nollywood star, Tonto Dikeh, is now an evangelist. She was in South Africa over the weekend to minister at the popular ECG church.

Radical for Christ as she calls herself, shared snaps and videos via her Instagram page on Sunday alerting her followers of the development. She ministered to over 7,000 youths.

Nollywood actress, Toyin Aihmaku, can’t contain her joy after her lover, an unnamed Lagos lawyer, popped the question. The actress was previously married to her colleague, Adeniyi Johnson (he is now married to another actress, Seyi Edun). Well, it appears the talented actress is already making moves towards making her wedding day a memorable one. She recently asked her publicist, Samuel Olatunji, to walk her down the aisle alongside her brother.

Sola Ogudu and Binta Diallo have called out Wizkid for not taking care of his sons. It all began when sola took to twitter to explain how she has been a mother and father to their son, Boluwatife, all by herself.

In a series of tweets, Sola revealed that Wizkid has fooled people into believing that he was taking care of his sons.

Meanwhile, the singer’s second baby mama, Binta, also confirmed Sola’s accusations with social media posts. According to her, Wizkid only supported her with $13,000 over a period of 2 years.

Peter Okoye, the one half of the disbanded music group, P-Square now known as name Mr. P, has been accused of intellectual theft by singer Henry Knight.

An 11-year-old, Carl Adebare Adekola made history on Saturday as the only Nigerian to sing at the Royal wedding of Prince Harry and Meghan on Saturday.

Carl, a member of St Thomas of Canterbury in Grays sang at the upcoming royal wedding of Prince Harry and Meghan.

He is a Royal Chorister, singing at St George’s Chapel on a daily basis whilst attending St George’s Windsor Castle Prep.

Formerly of St Thomas of Canterbury Primary School Grays and a past chorister of Brenthood cathedral, Carl was awarded the choral scholarship at age 8.