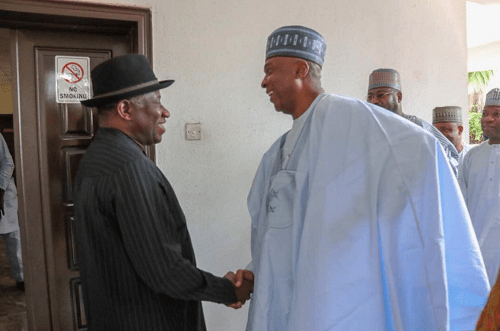 There have been the recent allegations that the former Nigerian President Goodluck Jonathan  is intending to defect from his existing party the  PDP, and these insinuations has been spoken on recently by another prominent politician in the person of Bukola Saraki.

Just as the general elections in Nigeria draw closer, many parties are beginning to make their intentions clearer. Partisan politics is now very evident as politicians and stakeholders are beginning to seek out potential candidates for political positions and are convincing and luring prominent individuals with special offers and juicy incentives.

Many are already aware that these underground politicking that involves convincing certain persons to either join or defect from their present political party, is obviously laden with major ulterior motives. Qualities such as the candidate’s qualifications, experience in Nigerian political terrain, financial capability and prominence and political integrity clearly come into play.

Saraki was shocked at the constant talk of Jonathan’s proposed defection from PDP and has shut down talks of Jonathan’s defection. He however has admitted that he’s being ‘disturbed’

The former senate president, has revealed that ex-President Goodluck Jonathan has reassured the Peoples Democratic Party (PDP) of his commitment.

Speaking on Tuesday  February 16 2021 after he led the reconciliation and strategy committee of the party to Goodluck Jonathan’s residence in Abuja, Saraki said the committee members had briefed the former president of their mandate and plan to strengthen the party.

The main objective of the committee which was set up in 2019 was to resolve the internal crisis within the PDP and appease aggrieved members.

According to Saraki, he disclosed that all those who were pestering the ex- president Jonathan to defect to another party should forget the plans and thought outright, saying the former president remains in PDP.

“Goodluck Jonathan gave us his views and we are very happy. He reassured all of us of his commitment to the PDP and he told us that he is still ready to offer his time, experience and resources to strengthen the party,” Saraki said.

“That is very strong and important for us. Of course, you know there are funny issues going on but we are leaving this place very happy.

“He is also ready to work with the reconciliation committee to play his own part. That is a great step for the party.

“We spoke about what role former presidents like him will play and he left us feeling very happy that yes, he will like to play that role in the PDP and help our committee to move forward.

“That is a great step for the party. We have put that behind us all those people of the other party that would like to come and disturb our leaders. Our leaders are here and they are ready to work for the party.”

Others were Mulikat Adeola-Akande, former leader of the house of representatives.

Many are really becoming fed up with party politics in Nigeria but rather they are interested in qualified and capable personalities to take charge of the affairs of the country as earlier focus on party rivalries in the past has seemed to have caused more chaos.

The hope of well meaning Nigerians and its citizens is that no matter what pans out eventually, there should be a very good leadership to handle the already ailing economy of the federation.