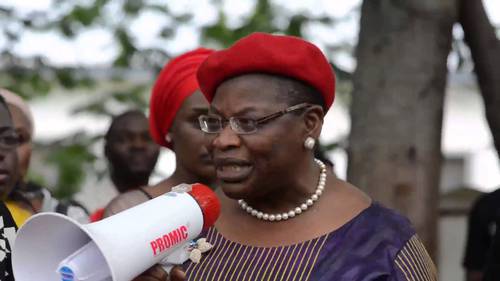 The Abuja police command has released the former Minister of Education and convener of the BringBackOurGirls group, Oby Ezekwesili.

Mrs. Ezekwesiki said the police refused to tell her and seven members of her group the reason they were arrested Tuesday in Abuja.

Mrs. Ezekwesili was arrested and detained by the police in Abuja earlier on Tuesday.

Her arrest, however, was believed to be connected to the activities of the group.

The group has been carrying out sit-outs in Abuja since more than 200 girls were abducted from Government Secondary School, Chibok, in April 2014 by Boko Haram insurgents.

Mr. Ezekwesili’s BBOG group has sustained its advocacy for the safe return of the girls to their families for more than three years.

She said Aisha Yesufu, a known critic of the President Muhammadu Buhari-led administration and six others, were also arrested.

In a series of tweets after her release, the former minister said the Abuja commissioner of police, Sadiq Abubakar Bello, who ordered their release did not state why they were detained.

“Without stating the reason for our arrest and detention, Commissioner of Police at the FCT Command, CP Bello has asked us to be let out of their station,” she tweeted.

“We insisted on a formal charge and release but his response? “I am the commissioner and now release you to go.”

Efforts by PREMIUM TIMES to reach the police authorities in Abuja for comment were not successful at the time of filing this report.