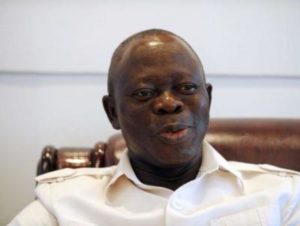 Any member of the Peoples Democratic Party (PDP) in Edo who goes against the law would be arrested and prosecuted.

Edo State Governor, Adams Oshiomhole, said this while responding to threats by the PDP to carry out mass protest over the arrest of 13 of its members.

Speaking at a meeting with youths from Ovia North-East, who were at Edo Government House, he explained that the PDP members were arrested for going against the law, adding that they had been charged to court to show that the state was not a banana republic.

“As long as I am here, there is no exemption for anyone. Nobody has the right to behave like an emperor.

“We were carrying poles to extend electricity to some villages but they (PDP) arranged some boys to block the vehicle.

“They forced the driver to stop, attacked one of our commissioners and said nothing will happen?” he said.