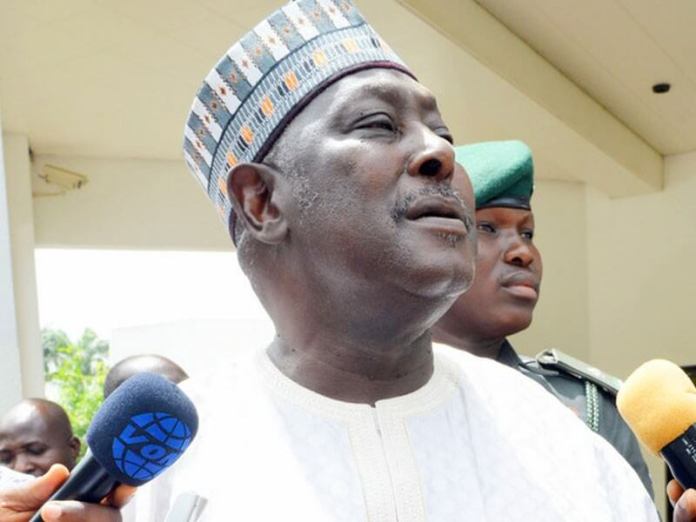 The Economic and Financial Crimes Commission (EFCC) wednesday detained the former Secretary to the Government of the Federation (SGF) Mr. Babachir Lawal over corruption allegations and diversion of funds when he superintended the Presidential Initiative on the North-east (PINE).

Confirming his arrest and detention wednesday, the EFCC Head of Enlightenment and Reorientation, Mr. Samin Amaddin said: “He was arrested for abuse of office in relation to the diversion of funds meant for humanitarian intervention in the North-east.

“He is still in detention and will be here till tomorrow (today) when we will continue with the interrogation because he has not concluded his statement.”

Lawal’s arrest may also not be unconnected to Tuesday’s 13-page statement by former President Olusegun Obasanjo accusing President Muhammadu Buhari of condoning corruption, particularly with the reinstatement of the former Chairman of the Presidential Pension Task Force, Mr. Abdulrasheed Maina.

Another EFCC source said Lawal arrived at the commission’s headquarters in Abuja around 11 a.m., after which he was interrogated.

The source said the former SGF, who was dismissed by Buhari last October, would spend the night at the EFCC and his interrogation would continue around 11 a.m. today, reported The Cable.

Lawal’s travails began on December 14, 2016, when the Senate ad-hoc committee on the mounting humanitarian crisis in the North-east indicted him for fraud in a contract awarded for the clearing of “invasive plant species” in Yobe State through PINE.

PINE, which was under Lawal supervision in his capacity as SGF, was at the time unable to account for N2.5 billion allocated to it for the alleviation of the humanitarian crisis in internally displaced persons (IDP) camps in the region.

Lawal’s crime, according to the ad-hoc committee, included his alleged spending of N570 million to cut grass.

Rholavision Engineering Ltd, a company owned by him, was also said to have got suspicious payments of N200 million from the contract.

Rholavision’s bank statements and other documents revealed how Josmon Technologies Ltd, a company that got the contract from PINE to clear grass for N248,939,231, made cash deposits of N10 million into Lawal’s company’s account 20 times from March 29.

Although the former SGF had claimed that he resigned from his company on August 15, 2015, and as a result was not a party to whatever business it contracted, documents at the Corporate Affairs Commission (CAC) showed that he was a director of Rholavision until September 16, 2016, when he wrote to the commission informing it of his intention to relinquish 1,500,000 ordinary shares.

After sacking him, Buhari said he expected anti-graft agencies to go after him.