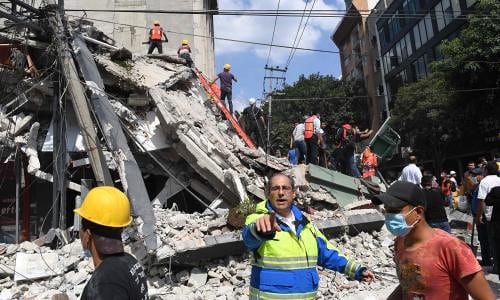 Emergency crews and volunteers are digging through rubble with their bare hands in search of trapped survivors after a powerful earthquake stuck central Mexico on Tuesday afternoon, toppling dozens of buildings and killing at least 225 people

The magnitude 7.1 quake – the deadliest to hit the nation since 1985 – struck shortly after 1pm local time, causing violent, prolonged shaking, which flattened buildings and sent masonry tumbling onto streets, crushing cars and people in the capital, Mexico City, and surrounding areas.

As the sun rose on Wednesday, rescuers armed with cutting tools and sniffer dogs continued to scramble to reach survivors pinned inside the ruins of offices, schools and apartment blocks amid plumes of dust and wailing sirens. Power cuts left much of the capital in darkness. Many people had spent the night outdoors, fearful of aftershocks.

It was the second major earthquake to hit Mexico in two weeks and came on the anniversary of the 1985 quake that devastated Mexico City, killing 5,000 people and destroying 10,000 homes.

The earthquake also appeared to have triggered an eruption of Mexico’s Popocatépetl volcano. In Atzitzihuacán on the slopes of the volcano, a church collapsed during mass, killing 15 people, Puebla governor José Antonio Gali said.

Public education undersecretary Javier Treviño said 21 children and four adults had died at the collapsed Enrique Rebsámen school, according to local media. The online news organisation Animal Político reported at least 30 children were still trapped in the school, according to Mexico City authorities.

The Mexican president, Enrique Peña Nieto, visited the site on Tuesday evening and was besieged by desperate parents, telling him that their children were missing.

Local residents, police and firefighters were using their bare hands to dig through the ruins of the four-storey building, which had pre-school, primary and secondary classes. Appeals went out for torches, batteries and water to help the rescuers with their search.

Pedro Serrano, a 29-year-old doctor, was one of the volunteers who managed to crawl into the rubble of a classroom only to find its occupants dead.

“We dug holes, then crawled in on our bellies,” Serrano told the Associated Press.

“We managed to get into a collapsed classroom. We saw some chairs and wooden tables. The next thing we saw was a leg, and then we started to move rubble and we found a girl and two adults a woman and a man.”

Asked if there was hope of finding anyone alive, Serrano said workers were still trying despite the danger.

“We can hear small noises, but we don’t know if they’re coming from above or below, from the walls above [crumbling], or someone below calling for help.”

Anxious parents outside the gates said they had heard reports that two families had received WhatsApp messages from girls trapped inside, but that could not be confirmed.

The rescue effort was punctuated by cries of “Quiet!” to allow searchers to listen for any faint calls for help.

Guillermo Salazar, a construction foreman whose crew was working on a half-finished apartment block, said “the building swayed like a hammock” when the quake struck.

Everyone escaped unscathed thanks in part to an earthquake drill held two hours earlier, added Salazar. “It was helpful. Everyone knew what to do.”

Elsewhere, however, there was chaos. Authorities took so long to respond to a collapsed seven-storey building in La Condesa, a wealthy part of Mexico City, that hundreds of people frantically scrambled through the rubble with their hands using shovels and shopping trolleys to remove debris.

The overall death toll was expected to continue rising as emergency crews and improvised citizen brigades combed through rubble.

“I thought that I had punctured a tyre. Then I saw all the light fixtures and signs swaying,” said Humberto Muñoz, who was driving from Puebla into Mexico City when the quake struck.

Peiby Ballau, a hairdresser, said it felt worse even than the 8.1 magnitude quake which hit further south on 7 September, killing at least 98 people and leaving 2.5 million in need of help. “The building really moved back and forth. Of all the earthquakes I’ve lived through, this was the strongest. You never get used to this. It was such a fright.”

Video posted online showed one building in the Roma neighbourhood collapsing in a cloud of dust as onlookers screamed and ran for safety.

Another video showed slabs of concrete peeling from the facade of the labour ministry and plunging onto the street below amid clouds of dust.

Gala Dluzhynska was on the second floor of a building on Alvaro Obregón street in the capital when the building began to totter. She said she fell over in the stairwell and people began to walk over her, before someone finally pulled her up. “There were no stairs anymore. There were rocks,” she told the Associated Press.

Mariana Morales, a 26-year-old nutritionist, said she was in a taxi when the quake struck and witnessed a building collapse a few yards away. “There was the sound of thunder … then dust and all this.” She joined the throngs of citizens who spontaneously joined rescue efforts, bolstering emergency crews. “The people are organising quickly,” she said.

Along Avenida de los Insurgentes – one of the city’s main thoroughfares – thousands of people streamed out of buildings in panic as alarms blared.

Mexico City Mayor Miguel Angel Mancera said buildings fell at 44 sites in the capital alone. Peña Nieto cut short a visit to the southern state of Oaxaca, which had been badly hit in the earlier quake.

The US president, Donald Trump, who had been criticised for a perceived tardy response to the earlier disaster, responded on Tuesday within minutes, tweeting: “God bless the people of Mexico City. We are with you and will be there for you.”

Much of Mexico City is built on former lake bed and the soil is known to amplify the effects of earthquakes even hundreds of miles away.

Improved safety laws and better disaster preparation means that earthquakes since 1985 have caused less damage in the capital. But Tuesday’s quake struck without warning, despite an alert mechanism which normally sounds an alert beforehand.