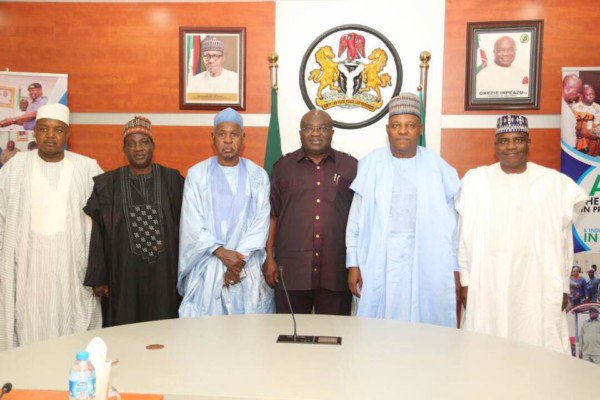 Northern governors have said that the challenges in the Southeast was not as a result of marginalisation as erroneously believed.

According to them, Igbos had occupied exalted positions like Secretary to the Government (SGF) of the Federation, Senate President and many others but the occupiers of those positions rather used them for ephemeral and selfish gains.

They spoke in Owerri, the Imo State capital, during a meeting with Igbo and Hausa leaders at the Government House.

The visiting governors led by Borno State Governor Kashim Shettima, who is also chairman of Northern Governors’ Forum, decried the poor state of major roads in the Southeast, but said politicians from the zone “are only interested in pocketing the resources that would have been used in developing the zone at the detriment of the people.

“You can take for instance the case of Nnamdi Kanu who is an ordinary criminal. When he was arrested, senators from the Southeast were falling head over heels to bail him for what they could gain at the detriment of national unity and peaceful coexistence.

“The problem of Nigeria is we the elite who are fanning the embers of hatred and disunity for selfish reasons. The country is passing through a grim and sober moment and by working together, we can get Nigeria to work again.

“We are here to thank our colleagues in the Southeast for standing on the part of peace and national unity. All we need is tolerance, justice and generosity of mind to move the country forward.

“Governor Okorocha has been dehumanised and branded all sorts of names for insisting on one indivisible Nigeria but he has remained unshaken in his faith in the unity of the country. We salute his sense of patriotism and his style of leadership, he is the kind of leader that Nigeria needs.”

Tambuwal said “Nigeria is not a mistake. Nigeria is a special creation we all must continue to strive to make it work. And for us to continue to coexist harmoniously, we must have respect for each other. We must respect each other’s’ culture because respect begets respect”.