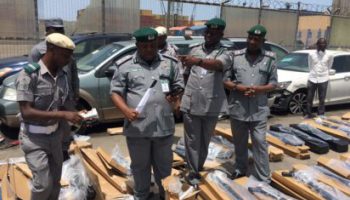 The latest container is believed to belong to the importer of the 1,100 pump action rifles that was recently seized in Lagos

This is the fourth interception this year and they are said to have all been imported from Turkey A container suspected to contain another cache of arms imported from Turkey has allegedly been discovered by the Tin Can Island Command of the Nigerian Customs Service (NCS) on Tuesday, September 19.

The discovery comes about a week after the command intercepted a 20-foot container laden with 1,100 pump action rifles.

The container with number, CMAU189817/8 is believed to contain about 475 sets of pump-action rifles, the Sun reports.

The latest container is also believed to belong to the importer of the 1,100 pump action rifles that were recently seized in Lagos.

“The container is owned by the same importer of the 1,100 guns. After a detailed profiling of the importer ordered by the area controller, it was discovered that he still has another container inside the port. So, officers were asked to fish out the container for examination. But I don’t know why they are hiding the identity of the importer,” a source told The Sun.

But when contacted, the National Public Relations Officer of the service, Joseph Attah, said a container was suspected and it has not been examined to know what is inside.

Meanwhile, NAIJ.com had reported that the Comptroller-General of Customs, retired Col. Hameed Ali, said the compliance team of the service discovered 18 suspected smuggled exotic vehicles displayed for sale in Abuja.

Ali said this while addressing newsmen on the interception of the vehicles on Tuesday, September 19, in Abuja. He said that beyond non-payment of customs duty, 13 of the vehicles were bullet proof.