More than 24 hours after he incited a mob to attack the US Capitol, Donald Trump has urged an end to the violence and finally acknowledged that Joe Biden will be the next president, saying in a video statement that “a new administration will be inaugurated on January 20” and promising a smooth transfer of power.

The statement was posted on Twitter – one of the only social media platforms to which the president still has access – following a day of silence after his unprecedented encouragement of rioters bent on insurrection.

Hours later, Capitol police confirmed that a police officer had died during the attack on Wednesday. A statement said Brian Sicknick was injured while physically engaging with protesters and an investigation into his death would be carried out.

Meanwhile, the top federal prosecutor in Washington DC said Trump’s statements to a rally before the storming of the Capitol would be examined as part of the investigation into the incident.

Asked specifically about the role of the president – who told the crowd to head to the Capitol and said they should “fight like hell” – acting US attorney Michael R Sherwin said: “We are looking at all actors here, and anyone that had a role, if the evidence fits the element of a crime, they’re going to be charged.”

Trump’s latest video statement came amid growing calls for his resignation or removal, and as a growing list of administration figures – including the education secretary, Betsy DeVos, and the transportation secretary, Elaine Chao – resigned in the wake of the attack. 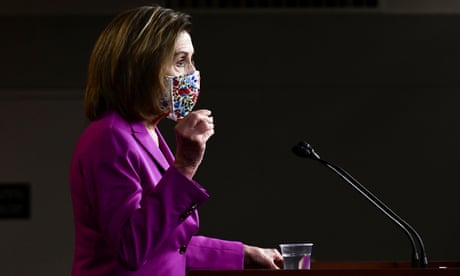 The president began the video with his first straightforward denunciation of the sacking of the US Capitol building, saying he was “outraged by the violence, lawlessness and mayhem”.

The statement marked a stark reversal in tone for the president, who has continued to stoke unrest and falsely claim that the election had been stolen from him. While stopping short of outright admitting defeat, Trump’s statement is the closest he has come to a concession speech.

“My campaign vigorously pursued every legal avenue to contest the election results. My only goal was to ensure the integrity of the vote,” said Trump, despite no evidence that the election was anything but safe, and assurances by his own attorney general that there was no widespread voter fraud.

“Now, Congress has certified the results. A new administration will be inaugurated on January 20. My focus now turns to ensuring a smooth, orderly and seamless transition of power.”

Trump concluded his brief remarks by calling for “healing and reconciliation” and saying that “tempers must be cooled”. He included a final message for his supporters, saying: “I know you are disappointed, but I also want you to know that our incredible journey is only just beginning.”

Trump’s statement came as the threat of a second impeachment loomed and a growing cohort of lawmakers called for him to pay a price for the tumultuous scenes in Washington.

On Wednesday, Trump encouraged thousands of supporters to march on the US Capitol to protest the election results, whipping up a mob that overran police officers and invaded the Capitol building, forcing members of Congress into hiding. Four people died, including one woman who was shot and killed by police and three people who died in medical emergencies.

The top Democrats in Congress – the House speaker, Nancy Pelosi, and the Senate Democratic leader, Chuck Schumer – have called on the vice-president, Mike Pence, and Trump’s cabinet to use the US constitution to remove Trump for “his incitement of insurrection”.

The 25th amendment allows a majority of the cabinet to remove a president from power if he is unable to discharge the duties of the office.

But Schumer and Pelosi said they have yet to hear back from Pence, and a Pence adviser told the Associated Press that the vice-president, who would have to lead any such effort, was opposed to using the amendment.

If Pence fails to act, Pelosi signaled she would likely reconvene the House to initiate impeachment proceedings against Trump for his role in Wednesday’s violence.

A handful of Republicans have also called for Trump’s removal but the party leadership remains more guarded. The Senate majority leader, Mitch McConnell, has blamed the attack on “unhinged criminals” but not mentioned Trump.

Elsewhere the Wall Street Journal, seen as a leading voice of the Republican establishment, also called on Trump to vacate his office.

In a Thursday evening editorial, the paper called on the president to resign rather than face impeachment or a forced removal under the 25th amendment.

“This was an assault on the constitutional process of transferring power after an election,” the paper’s editorial board wrote of Trump’s actions on Wednesday. “It was also an assault on the legislature from an executive sworn to uphold the laws of the United States. This goes beyond merely refusing to concede defeat. In our view it crosses a constitutional line that Mr Trump hasn’t previously crossed. It is impeachable.”

The editorial boards of the New York Times, the Washington Post, and USA Today have issued similar calls.

Several members of Trump’s administration, including DeVos and Chao, who is married to McConnell, resigned as a symbolic gesture against the violence.

The US Senate sergeant-at-arms, Michael Stenger, the House sergeant-at-arms, Paul D Irving, and the chief of the US Capitol police, Steven Sund, all resigned on Thursday in the wake of the unprecedented security breach of the Capitol, which has has drawn outrage and scrutiny.

Speaking in Delaware on Thursday, Joe Biden called those who stormed the Capitol building “domestic terrorists” . Speaking just hours after Congress certified him the winner of the 2020 election, the president-elect called the previous afternoon’s events “one of the darkest days in the history of our nation”.

News is under threat …

… just when we need it the most. Millions of readers around the world are flocking to the Guardian in search of honest, authoritative, fact-based reporting that can help them understand the biggest challenge we have faced in our lifetime. But at this crucial moment, news organisations are facing a cruel financial double blow: with fewer people able to leave their homes, and fewer news vendors in operation, we’re seeing a reduction in newspaper sales across the UK. Advertising revenue continues to fall steeply meanwhile as businesses feel the pinch. We need you to help fill the gap.

We believe every one of us deserves equal access to vital public service journalism. So, unlike many others, we made a different choice: to keep Guardian journalism open for all, regardless of where they live or what they can afford to pay. This would not be possible without financial contributions from those who can afford to pay, who now support our work from 180 countries around the world.

Reader financial support has meant we can keep investigating, disentangling and interrogating. It has protected our independence, which has never been so critical. We are so grateful.

We need your support so we can keep delivering quality journalism that’s open and independent. And that is here for the long term. Every reader contribution, however big or small, is so valuable. Support The Guardian from as little as $1 – and it only takes a minute. Thank you.