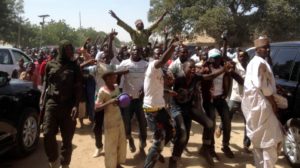 Some Northern youths under the aegis of Northern Youth Leaders Assembly, NYLA, have averred that President Muhammadu Buhari has done so much to put the nation on the path to progress, warning that they will no longer tolerate any further attack on the image of the President and his family.

In a communiqué co-signed by its Chairman, Communique Drafting Committee, Yakubu Danlami and Secretary, Kwuanu Terrence, the group said it will no longer tolerate any insult to the family and members of the president’s cabinet threatening to mobilize “resources to take on anyone who think they can use their image as a chess pawn in the game playing out in the media.”

“We warn that the north will no longer tolerate any further attack on the image, family and character of President Muhammadu Buhari in his quest to make Nigeria a better place for all. We take particular exception to our Service Chiefs, security personnel and their families being harassed needlessly and we will not hesitate to mobilize our resources to take on anyone who think they can use their image as a chess pawn in the game playing out in the media,” they warned.

NYLA held that political and public office holders are being demonised and criminalised on account of what they stand for, stressing that the height of this is the rebirth of separatist movements and militant groups in the southern part of the country to harass the Buhari Presidency.

It maintained that some of those behind these aberrations have openly declared that they are doing it to express their ethnic discontent, warning that this does not bode well for the country’s quest for one Nigeria.

Meanwhile, the youths have decided set up a media team responsible for countering propaganda against the north. The media team, according to them, will regularly highlight the President’s contributions to Nigeria’s democracy.