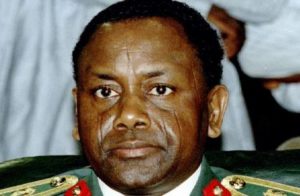 The United States (US) Government has laid claim to hundreds of millions of dollars stashed abroad by the government of the late military ruler, Sani Abacha.

The Americans allegedly told a court in an unnamed foreign country that it had an interest in the loot because it was saved in its currency, the US dollar.

Attorney-General of the Federation and Minister of Justice, Abubakar Malami (SAN) and rights activist Mr. Femi Falana (SAN) made the claims yesterday in Lagos.

Malami, guest speaker Falana, Chief Chairman, Special Investigative Panel on Assets Recovery Okoi Obono-Obla, among others, were participants in a seminar organized by the Socio-Economic Rights and Accountability Project (SERAP).

The seminar with the theme: Promoting Transparency and Accountability in the Recovery of Stolen Assets in Nigeria: Proposals for Reform, was organized in collaboration with Ford Foundation, USA.

The AGF, who was represented by his Senior Special Assistant on White Collar Crimes, Mr Abiodun Aikomo, gave the hint of the US’ involvement in the case while condemning public officials who ferry their loot abroad.

“We have seen instances where the Federal Government of Nigeria engaged counsel to recover our stolen assets and the matter went on for many years,” he said.

“On the eve of a judgment, the government of a country filed an application for joinder, this was a matter that was on for seven years and judgment was going to be delivered the next day.”

“The government of the country filed, saying ‘Even though the money is not kept in our bank, even though you would think we do not have any connection with the funds, the money is in our currency and we are talking about hundreds of millions in our currency. So, if you’re moving those funds from our state, then we are interested.”

“That was how the judgment was more or less arrested. So, the people stealing money and taking it out of Nigeria are doing us a lot of evil, because the moment the money leaves Nigeria it assumes another dimension.”

But Falana, who accused the United States, Switzerland, the UK and other western nations of hypocritical behavior in Nigeria’s quest to recover loot stashed in their banks, identified the US as the country concerned.

“Nigeria traced part of the Abacha loot to Jersey, an island in the United Kingdom. The Attorney-General filed a process to – by the way I was in that country when the person was convicted – the money left Nigeria through Kenya and landed in Jersey. It was from the late Abacha,” he said.

“Nigeria wanted to collect the remaining loot. But the United States filed an objection saying the money could not be released to Nigeria.”

“The court asked why, the US said if the money must be released, it should be released to the US government, so that ‘we can manage it for Nigeria.”

“The other one, $321million, Switzerland, a notorious conduit for corruption, had the temerity to say that ‘unless the World Bank is going to manage this money, we are not going to release this money.”

Falana urged the Federal Government not to depend on the West in its loot recovery drive.

“The United Nations Convention Against Corruption has made adequate provisions against corruption mandating countries to assist each other but western countries have not been helping us. Our government should stop relying on the west.”

The Silk said he had advised and the government was considering to sue foreign banks illegally holding onto funds that were stolen from Nigeria.

He also revealed that plans were underway to seek redress for the 21 coal miners allegedly murdered by the British police under colonial rule in Nigeria, just like Kenya obtained £19.4million as compensation for victims of the Mau Mau revolt against colonialism in the 50s.

Obla, who refrained from clear political comments because he had been “gagged”, said there would be no sacred cows in the quest to recover fraudulently acquired assets.

Obono-Obla said: “Without mentioning names, we are currently investigating a director in a Federal Government ministry…We saw so much and we went to the Code of Conduct Bureau, got his asset form and discovered that a lot of companies that he has been using to make money were not mentioned in his assets declaration form. The man is in soup.”

The Special Assistant to the President on Prosecutions vowed that the panel would not recognize any sacred cows. He urged Nigerians to assist it with information on assets procured with stolen funds.

“If you don’t give us information, we may not know. The panel has powers to investigate public officers in the three tiers of government: federal, state and local. No sacred cows, as far as I am concerned. We must investigate everybody. Any complaint that requires an investigation will be investigated,” Obono-Obla said.

SERAP director Adetunbo Mumuni, who spoke earlier, praised the government for mustering the will to tackle corruption.

“Before President Muhammadu Buhari came, we knew there was massive corruption, but this administration has made attempts to bring corrupt people to justice,” he said.