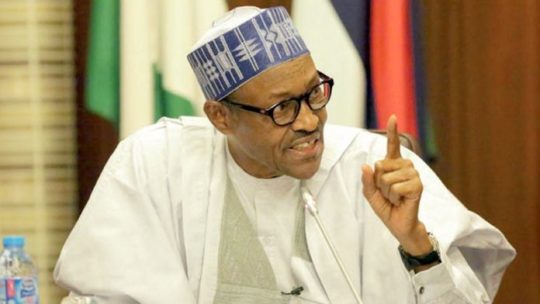 The President had in his nationwide broadcast, yesterday, to commemorate Democracy Day and his administration’s third anniversary, said those behind the killings in the country and their sponsors would not be spared in Federal Government’s determination to punish criminals.

This is just as apex Igbo socio-political group, Ohanaeze Ndigbo, said the President trivialised the issue by linking the killings across the country to just herdsmen/farmers’ clashes.

President Buhari further said his administration was pained by the grievous destruction of lives by insurgents and other criminal groups in different parts of the country, insisting that his administration would not relent until they were brought to justice.

According to him, the government is strengthening the capacity of the security forces to deal with the high level of insecurity in the country through training and purchase of equipment.

Besides, he said it was his administration’s commitment at ensuring the protection of the citizenry that led to the rescue of some of the Chibok and Dapchi girls as well as 16,000 other captives of Boko Haram.

He said:   “The unfortunate incidences of kidnappings, herdsmen and farmers clashes in several communities which have led to high number of fatalities and loss of properties across the country is being addressed and the identified culprits    and their sponsors shall be made to face the full wrath of the law. All the three tiers of Government are presently engaged with communities and religious organizations to restore peaceful co-existence among Nigerians.

“I want to commend members of the Multinational Joint Task Force drawn from Niger, Benin, Chad, Cameroon and our own country in collaboration with the International Community who are assisting in the fight against insurgency in the North East. I also commend the gallantry of members of our Armed Forces and other security agencies that have continued to provide security for lives and properties across the country.    State and Local traditional authorities are helping with much needed intelligence in this fight against insurgency.

“This administration is pained over the grievous loss of lives and properties occasioned by the carnage of insurgency and other forms of criminality in the country. I wish to assure Nigerians that we will not rest until all criminal elements and their sponsors are brought to justice.”

In its reaction, the Catholic Bishops Conference of Nigeria, CBCN, said the church was dissatisfied with President Muhammadu Buhari’s remarks on the killer herdsmen during his Democracy Day address to the nation.

In a message issued by Director, Social Communications at the Catholic Secretariat of Nigeria, Fr. Chris Anyanwu, the Catholic Bishops described the president’s passing reference to the killer herdsmen as vague and evasive.

They said the Catholic community in Nigeria expected to hear that the killer herdsmen and their sponsors had been arrested and were being prepared for prosecution.

The Bishops charged the President to demonstrate to the church through concrete actions that he had the capacity to secure every citizen, irrespective of religious inclination, by the prompt arrest of the killer herdsmen.

The Bishops said: “It is unacceptable to the church that President Muhammadu Buhari simply made a vague reference to the killer herdsmen in his Democracy Day speech.

“We find his promise to bring the killer herdsmen to full wrath of the law as evasive and the Catholic Church is not comfortable with that. We had hoped to hear him tell the nation that the murderous herdsmen have been arrested and being made ready for prosecution.”

Only you can stop killings, Atiku tells FG

In his reaction through a statement to commemorate Democracy Day, former Vice-President, Atiku Abubakar, said the story of Somalia, Burundi, and Rwanda should be strident warning to Nigerians, stressing that it was only the Federal Government that could stop the killings in the country.

He said those in government whose jobs were to keep the citizens safe should desist from making ridiculous excuses and engaging in diversionary finger-pointing.

Abubakar said: “Let us spare some time to reflect and to mourn all those murdered in the ongoing needless killings across our dear country.

“These Nigerians have been killed in the continuing murderous rampage of criminal elements across the country but especially in Borno and Yobe, and the Benue River Valley, stretching from Adamawa through Taraba to the confluence of Kogi and Benue, and including Nasarawa, Plateau, Southern Kaduna, and Zamfara.

“Others have been killed by armed robbers, kidnappers, cattle rustlers and other marauding bandits. The killings have even extended to sacred places of worship where innocent Imams and Christian clergy and worshipers are slaughtered. This carnage has gone on for too long and must stop.

Spokesperson of Pan Yoruba socio-cultural group, Afenifere, Mr.Yinka Odumakin, said in the group’s reaction:  “If he has been President for three years without bringing anyone to book for the killings, we should be suspicious of the statement.

‘’No one has been brought to book for the killings across the country. He talked as if he is a presidential aspirant. He does not know that 2019 is not about what he will do but what he has done.

Ohanaeze said the President trivialised the killing of Nigerians in the churches and their homes by armed herdsmen by referring to such incidents as farmers/ herdsmen clashes.

The group said:  “The President concluded his speech without sympathising with the relations of those who were killed while sleeping in their homes or praying in their churches. This is condemnable. His (President’s) attempt to reduce the willful killings of Nigerians in their homes to clashes between herdsmen and farmers is a mockery of the situation. He has trivialised the issue and this is like pouring petrol into a raging fire.

“ This is unfortunate. The speech was not presidential. He should have used this rare opportunity to sooth frayed nerves. It is bad.”

Speaking in a similar vein ,yesterday, Governor Samuel Ortom of Benue State exonerated President Muhammadu Buhari from the herdsmen killings in the state, stressing that those linking the President to attacks were being mischievous.

He recalled that the herdsmen crisis predated the present administration, assuring that the people of the state would still support the President in the coming 2019 general elections, despite the losses and pains they suffered as a result of the herdsmen incursions in the state.

The governor, who was answering questions, yesterday, in Makurdi, on how he would convince Benue people to vote for President Buhari again in 2019, said:  “Buhari will definitely come here for campaigns, I cannot preempt what he will say or what Benue people will say. But as you know in politics, there are no permanent enemies or permanent friends but permanent interest.

“But one thing I want you to know is that the herdsmen/farmers clashes predate this government. So, it will be a fallacy to conclude that herdsmen killings in the state is linked to President Buhari. That the herdsmen are killing Benue people does not mean it is Buhari who is responsible.

“There are still reasonable herdsmen who still live here in peace with their neighbours. There are some who support the anti-open grazing law but the real enemy is Miyetti Allah Kautal Hore. They are the ones we hold responsible because they addressed the media and stood up against our anti open grazing law.

“They vowed to resist the law and went ahead to do it. They are a violent group. We know them and we are holding them responsible and have also gone a step further to institute a criminal case against them in the court.”