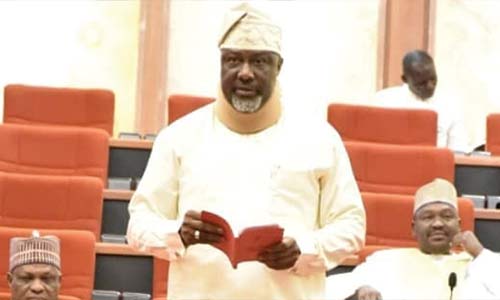 The Kogi West senator, Dino Melaye, has accused President Muhammadu Buhari of making derogatory statements about him and the National Assembly.

He was referring to a statement credited to Mr Buhari where he accused the National Assembly of indolence.

Speaking when he received a delegation of Buhari Support Organisation (BSO) at the Presidential Villa on May 22, Mr Buhari came down hard on the members of the National Assembly.

“As a senator who came to the National Assembly in 2007, about eleven years ago, I am particularly unhappy that my privilege is abused by the President of the Federal Republic of Nigeria, President Muhammadu Buhari last week.

“Last week, the president in the Presidential Villa while addressing the delegation of the Buhari Campaign Organisation and this was televised in Channels Television and AIT and I have a copy to tender.

“For the president to so speak in low tones about the National Assembly, I begin to ask myself if Donald Trump will address the Senate of United States in like manner,” he said.

The lawmaker said such statement by Mr Buhari is the reason why some government appointees disrespect the National Assembly.

“One then begins not to wonder why we will summon the IG and he refused to come. We are not then surprised why Directors-General and heads of agencies will refuse to honour the summons of the Senate. Because the body language and the statement of the president is already demeaning the integrity of the National Assembly.”

Mr Melaye faulted the leadership of the campaign group that visited the president. He noted that such group should not be led by a government appointee, Comptroller-General of Customs, Hameed Ali, as was the case.

“So that this will not continue, so that very soon we will not see the IG attending the APC convention on June 23rd. so that we will not see the Chief of Army Staff shouting APC in some of the campaigns. We must as a Senate take a strong decision today to protect our institution.

He called on Mr Buhari to apologise to the National Assembly for the statement while urging his colleagues to address the practice of heads of agencies getting involved in politics.

As evidence that he and his colleagues are working, the lawmaker said the National Assembly has been passing budgets and has been working with the executive in the fight against corruption even before Mr Buhari’s emergence as president.

In reaction, the Senate President, Bukola Saraki, urged his colleagues to give Mr Buhari a benefit of doubt while they look into the matter.

“I want to believe that Mr President was misquoted. We should not rush to come to this conclusion. The agencies that continue to participate in politics, we must call them to order,” he said.

With the aid of a walking stick, still with his neck support, Mr Melaye slowly walked down the chamber’s gangway to submit the compact disc as evidence.

PREMIUM TIMES reported how the president criticised the National Assembly and his predecessors last week.

Mr Melaye, who survived a recall exercise, is officially a member of the president’s party, APC. He, however, requested and was allowed to sit with the opposition PDP on Wednesday. He thanked the PDP for supporting him during his travails.

Apart from surviving a recall which he blamed on his state APC governor, Yahaya Bello, Mr Melaye is also being prosecuted by the police in two separate charges in Abuja and Kogi.