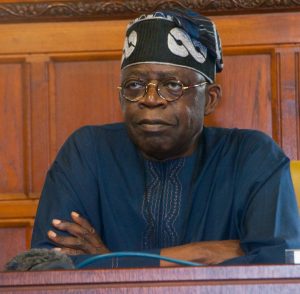 Jide died, yesterday, after he reportedly complained of “chest pain.”

A family source told Daily Sun that “Jide went out on Tuesday night and returned in the morning. thereafter, he compel of chest pain. We quickly rushed him to the general Hospital, Ikeja where he died.”

Another source confirmed that the family rushed Jide to hospital, “after he complained of chest pains and they even called Dr. Ade Tinubu, at Lgos State University Teaching Hospital (LASUTH), but  Jide died before he got to the hospital.”

Asked whether the deceased was sick prior to complaints of chest pain, the family source muttered “no.”

In a short message addressed to APC members, Ajomale wrote: “It’s with regrets that i inform you of the demise of Mr. Jide Tinubu, the son of our dear and esteemed leaders, Asiwaju Bola Ahmed Tinubu. Please, commiserate with you…”

His Special Adviser on Media and Publicity, Femi Adesina, in a statement said Buhari spoke with with Tinubu on telephone, yesterday and condoled with him, on behalf of the Federal Government and his family and offered his deepest condolences to the Tinubu family over Jide’s loss.

Buhari described Jide’s death as “sad and painful,” and added the nation has been denied the services and potentials of the resourceful lawyer.

He prayed God grants the Tinubu family, friends and associates “the fortitude to bear this irreparable loss, and comfort all who mourn the passage of the promising gentleman.”

On his part, Speaker Yakubu Dogara, in a personally signed statement, said “it is saddening that a father buries his son. I can only imagine your pain and grief at this time. I pray God Almighty to grant your family the fortitude to bear this irreparable loss.”

Oyo State Governor, Senator Abiola Ajimobi, expressed over what he called the depressing news of the death of his beloved scion, Jide.

In a statement by his Special Adviser, Communication and Strategy, Mr. Yomi Layinka, the governor expressed regrets that the cold hands of death have snatched another promising and ebullient young man.

Ajimobi described the sudden death of the APC national leader’s son as not only shocking but also, unfortunate and disheartening.

“My dear Asiwaju, please accept my heartfelt condolences. On behalf of myself, family and the good people of Oyo State, I pray that God will give you the strength and courage to bear this monumental loss.

“My thoughts and prayers are with you in this trying period. With Jide’s death, the country has lost another shining star and future leader.

“May the Almighty comfort his wife, children and the entire family.”

“I pray the Almighty God to to give out leader the fortitude to bear this unfortunate loss. It is my fervent prayer that incidents like this will never happen to him or any of us in the larger family, again.”

Benue: Another 39 killed as Reps ask Buhari to declare all killer-herdsmen as terrorists