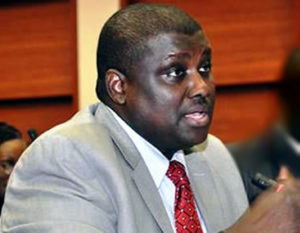 Special Adviser to President Muhammadu Buhari on Media and Publicity, Mr Femi Adesina has chided notions that the Presidency was poised to abandon investigation into the reinstatement of former Chairman of the Pension Reform Task Team, Mr Abdulrasheed Maina into the public service.

According to Adesina, while featuring on a Channels Television programme, on Wednesday, President Buhari would act after studying the report on Maina’s secret reinstatement as submitted by the Head of Service, Mrs Winifred Oyo-Ita.

He alluded to the fact that just like the President took his time before acting on the report on the probe of the former Secretary to the Government of the Federation, Dr Babachir Lawal and former Director General, Nigeria Intelligence Agency, Ambassador Ayo Oke, he would also act on the Maina saga when he deems right.

“Maina was ordered to be disengaged from service and a report was asked for. That report came in and the President has it. So till the President gets back to Nigerians, no one can say that the matter is closed or has been swept under the carpet.”

“A couple of days ago, he gave a timeline on the former SGF, DG, NIA, and you gave a dateline from April 19 suspension to the submission of the report on August 23 and you had a feedback on October 29. So that tells you that nothing is swept by this administration; you will get a feedback,” Adesina said.

On the leaked letter sent by the Oyo-Ita indicting President Buhari on Maina’s reinstatement, Adesina urged Nigerians to question the Head of Service on whether she actually wrote the said letter rather than the office of the Presidency.

This is as he said it would be only a conjecture for Nigerians to conclude that Maina’s reinstatement was the subject of the heated argument at Wednesday’s Federal Executive Council meeting between Oyo-Ita and Chief of Staff to the President, Mr Abba Kyari.

“As a good journalist which you are, your first point of call should be the Head of Service, let her authenticate what is in the public domain that it really came from her. When she owns that memo supposedly written by her, then we take it from there. She is the first point of call for you.”