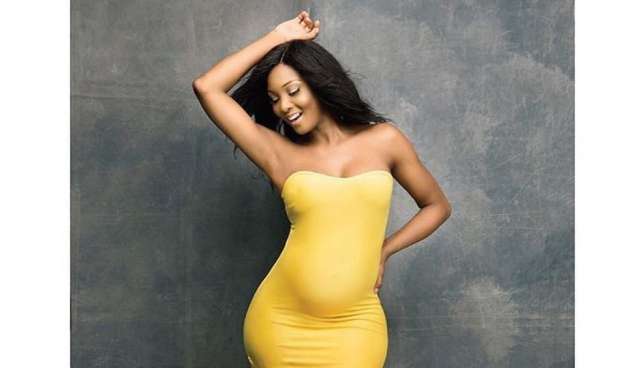 Earlier in the week, Banky W popped up in the news for airing his opinion on nude maternity shoots.

The story made the rounds and Banky W had to speak further about his comments. Maternity shoots have been around since the camera.

And while some have decided to go nude during for their maternity photoshoots, others have kept their clothes on. It’s a free world and we can do as we please.

Now, below is a list of female celebrity mums’ photoshoots. Enjoy;

Nigeria’s most popular choreographer Kaffy is a mother of two beautiful children with her drummer husband. When she was pregnant with her second child and first daughter, Kaffy took some really cute maternity photos which really brought out the sexiness in her. In one of the photos, her son, Sean watched as his mum slayed for the cameras.

Now, this is one actress and philanthropist who makes the red carpet dazzle with her presence and so when she got pregnant with her first baby in 2015, taking a maternity photo shoot was inevitable. Stephanie wore a white dress which made her look really sexy. Stephanie Linus got married to her husband, Linus Idahosa in 2012 in a very cute private wedding in Rome.

When we talk about that actress with so much style and beauty, Osas Ighodaro Ajibade comes to mind. Her photos have always been breathtaking so when she decided to release a photo shoot when she was pregnant with her son, we weren’t surprised as she looked hot. Osas took the shoot to a different level as it didn’t even look like she was pregnant because she just looked ravishingly sexy.

Here is one of the most beautiful actresses in the country who is married Steven Mcdermott. Ufuoma is a doting mother with two beautiful kids. When she was pregnant with her second child and daughter in 2015, the lovely actress took some maternity photo shoots.

When a well known singer and photographer decides to have her own pregnancy photo shoot, then expect nothing but the best. TY Bello back in 2014 before the arrival of her very cute twins had an emotional and cute maternity shoot.
Courtesy: PULSE
QUICK SHARE: