Senator Oluremi Tinubu, representing Lagos Central and the wife to the national leader of the All Progressives Congress, Bola Ahmed Tinubu, on Wednesday, November 18, raised dust in the Senate when she gracefully sat on the seat meant for deputy Senate president, Ike Ekweremadu. 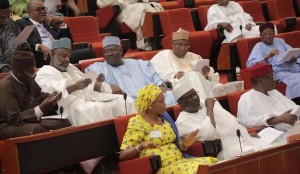 It took the reproof of the senators elected on the platform of the Peoples Democratic Party for Tinubu to relocate back to her chair to second a motion for the approval of Lagos state development policy operation loan.

The rebuke came when the senator stood up to speak while still standing in the deputy Senate president corner. 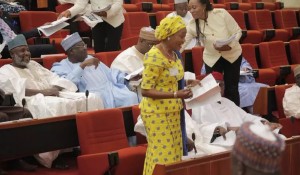 The APC leader’s wife, however, returned back to Ekweremadu’s position, who was absent from plenary immediately after she seconded the motion. 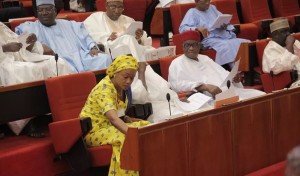 It was learnt that she sat in the chair meant for Senate president, Bukola Saraki’s deputy to hold conversation with the leader of the Senate, Aliyu Ndume.

During plenary, the Senate approved the $200 million loan requested by Lagos state government from the World Bank after a debate on the report of its adhoc committee on local and foreign debts.

Senator Danjuwa Goje from Gombe state initially urged the Senate not to approve the loan stating that it will leave the state with huge debt burden for future governments but later went ahead to give his support for the loan request.

Contributing on the loan request, Senator George Sekibo from Rivers state urged the Senate to put proper check in place to monitor how the money is being handled.

In a related development, Professor Ajayi Boroffice, a senator representing Ondo-North, has warned a commercial bank against granting a N7 billion loan request for the Ondo state government.

He advised that granting such loan few months to the expiration of the tenure of Governor Olusegun Mimiko’s does not make economic sense.