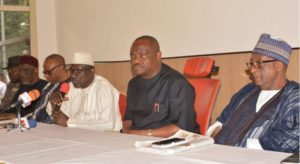 The Peoples Democratic Party, PDP, on Wednesday suspended the election into its national executive council, even though the national convention is still ongoing

Minority Leader of the House of Reps, Leo Ogor moved a motion for election into the national offices to be suspended and it was seconded by voice vote after which the majority carried the day.