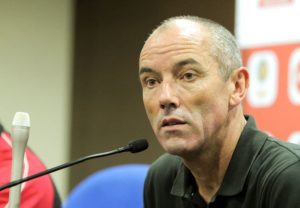 After failing to qualify for the second successive Africa Cup of Nations, and included in a “group of death” for the preliminaries of the 2018 World Cup in Russia, the Amaju Pinnick led Nigeria Football Federation is targeting French -man, Paul Le Guen, to lead Super Eagles to the promised land. In this report, Kunle Adewale asks if Le Guen can part the qualification red sea for Nigeria

In spite of Sunday Oliseh’s unceremonious exit as Super Eagles coach and Amaju Pinnick’s insistence of his passion for a local coach for the senior national team,  it came as a little surprise that the egg heads of the Nigeria Football Federation now favour Frenchman Paul Le Guen to lead Super Eagles in its quest for a ticket to 2018 World Cup in Russia.

“We are looking at their adequacies and inadequacies. We are looking at the appraisal and if at the end of the day, we realise that they cannot live up to the federation’s expectation, we would look beyond them. At the moment, my dream is to have a Nigerian coach anytime, but it goes beyond technical competence on the field. What about managerial prowess? There are lot things that come to play when it comes to coaching,” Pinnick had told THISDAY before going for Le Guen.

The Glass House boss said while he was in Ghana as a match commissioner, he engaged some Ghanaian players and was told Avram Grant spent 18 hours with his18 players – meaning he spent an hour per player.  “And what do they do, it’s just all about psychology. Do our coaches have the energy to do that?” he queried.

Speaking further, he said: “We do not want to make any mistake this time around. Even if we are in a group that has Algeria and Egypt, we would still qualify. We don’t care who is in our group. Other countries should be scared of Nigeria now because of the quality of the new team we are presenting.

“One thing I can assure Nigerians is that whatever decision we arrived at eventually, would be in the best interest of the country without any bias. But my dream is to have a Nigerian coach, but if ultimately we settled for a foreign coach, it will not be for more than two years.

“Nigeria has the youngest and the most enterprising team in the world today. Look at the Italian team playing in Euro 2016, they don’t have any big name but look at what they did against Belgium that boast of well-known players. Today’s world is youth football; players between the ages of 18 and 21.”

Pinnick, however, agreed that the World Cup qualifying draws that pitted Nigeria against Algeria, Cameroon and Zambia would be tough to scale through

“It is a tough draw, but then I have always said that you have to beat the best to get to the World Cup. Now, we have the draw, we know how to prepare. The preparation has to start right now and we must make good use of every single day leading to the kickoff of the series. The other pools are tough as well, because for me, you can never afford to underrate any team these days. Now, we must quickly sort out the issue of Head Coach and his assistants and put every other thing in place in good time,” Pinnick said.

The leadership of the NFF may settle for the Frenchman as the manager to lead the Super Eagles campaign to qualify for the next FIFA World Cup in Russia.

The NFF leadership was said to have weighed all the options available from the coaches that applied for the job and may settle for the former Olympique Lyon and Cameroon coach.

A top level source at the Glass House in Abuja hinted that Le Guen appears to have first-hand knowledge of almost all top Nigerian professional players in Europe and is ready to roll with them as soon as possible.

“He knows our players very well and how to use them. In our meeting with him earlier, Paul (Le Guen) demonstrated to us his capacity to turn around our football. We are also looking at reaping from his knowledge of both Cameroun where he coached the Indomitable Lions and Algeria who are desperate to have him,” the NFF source said.

Meanwhile, former national team coach and captain, Christian Chukwu believes that Nigeria stand a chance against Cameroon and Algeria to qualify for the 2018 World Cup but said early preparations and immediate appointment of a substantive handler will ensure the country avoid a tortuous route to Russia 2018.

“Why not? We stand a very big chance to qualify likewise others but all depends on our level of preparations. If we prepare very well, we have a very young team that can qualify us from the group. Though they are not pushovers, but the truth is that the way we are talking about them is also the same way they would be having sleepless nights because of us.

“They are very afraid of us and another thing that gives us an advantage is that they would be playing at the 2017 Africa Cup of Nations while we will not, which gives us plenty time to get ready and be focused,” he said.

During his time at Rennes between 1998 and 2001, Le Guen was noted for signing then unknown players, such as Shabani Nonda and EL Hadji Diouf, who under his guidance, developed into talented footballers. He resigned from Rennes in 2001 after a fall-out with the club’s board. This led to his taking a year off from football.

Le Guen replaced Jacques Santini as manager of Olympique Lyonnais in 2002 after they captured their first league title. He experienced a grim start to his managerial career at Lyon, winning only three games of the first nine, but eventually took Lyon to a further three consecutive championships and reached the UEFA Champions League quarter-final. He resigned in 2005, the day after the club won their fourth consecutive Ligue 1 championship.

After leaving the club, Le Guen embarked upon another year away from football management. During this time, he turned down management positions at several top European clubs including Benfica and Lazio.

In March 2006, Le Guen agreed to replace Alex McLeish as manager of Rangers on a three-year contract with the option to extend his stay at Ibrox, He however made a poor start to his Ibrox career. His record across his first 10 league games was the worst start to a season by an Old Firm debutant since John Greig. He left Rangers by mutual consent in 2007

Le Guen was named Cameroon’s national football team manager in July 2009, signing a five-month contract and made an immediate impact by leading the team to qualification for the 2010 World Cup in South Africa. However Cameroon were the first team officially knocked out of the 2010 World Cup. He announced his resignation on 24  June 2010.

In 2011, he e accepted an offer from Oman national football team and led Oman to qualification for the 2015 AFC Asian Cup. Oman were eliminated in the group stage of the tournament with one win and two losses. He was sacked on November 2015 after a poor start of the 2018 FIFA World Cup qualification campaign.