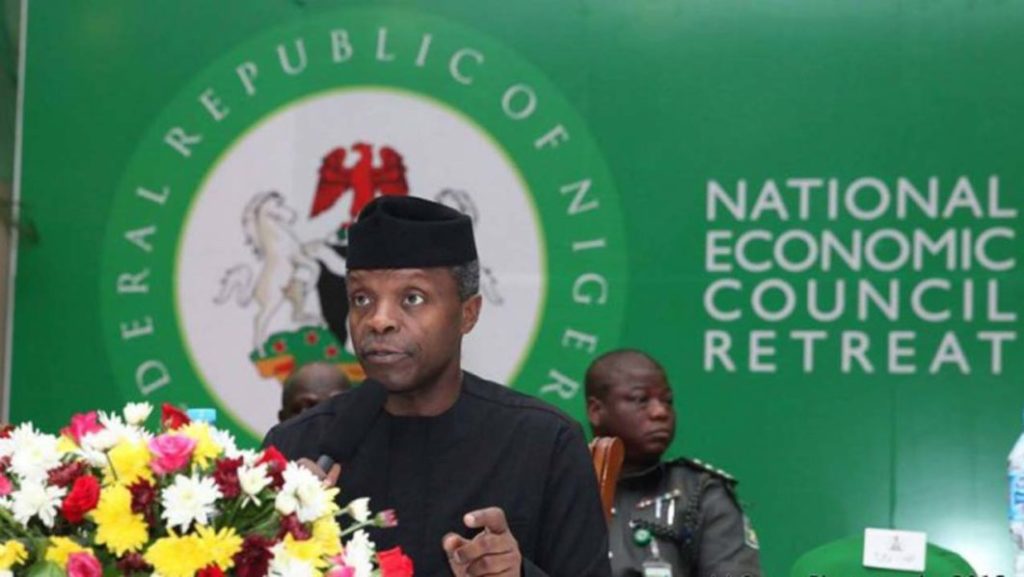 Amid the management crisis in the Nigerian National Petroleum Corporation (NNPC), it was confusion yesterday as Vice President Yemi Osinbajo said he did not approve contracts but loans for the the organisation.

His Senior Special Assistant (Media and Publicity), Laolu Akande, had earlier yesterday in his twitter page, @akandeoji, announced that Osinbajo admitted granting approval to the NNPC for two oil contracts worth N640 billion while President Muhammadu Buhari was away on medical leave.Akande said Osinbajo approved the contracts in his capacity as Acting President in July.

“In response to media inquiries on NNPC joint venture financing, VP Osinbajo, as acting president approved recommendation after due diligence,” Akande stated. “Action necessary to deal with huge backlog of unpaid cash calls which Buhari administration inherited and also to incentivise much needed fresh investments in the oil and gas sector,” he tweeted.

The Minister of State for Petroleum, Dr. Ibe Kachikwu, had alleged that NNPC’s Group Managing Director, Dr. Maikanti Baru awarded the contracts without due process.NNPC had stated in its response that two presidential approvals were granted to the corporation for contracts with Shell Nigeria and Chevron at the rate of $1 billion and $780 million.

But Osinbajo later disowned the statement by his aide, saying the approvals he granted to the NNPC while he was acting president were for financing arrangements for the joint ventures between the corporation and International Oil Companies (IOCs) and not contracts.

At Bonny Island in Rivers State where he kicked off the Bodo-Bonny Road project yesterday, Osinbajo insisted that he granted loans and not contracts.“These were financing loans. Of course, you know what the joint ventures are, with the lOCs like Chevron that have to procure.“In some cases, NNPC and their joint venture partners have to secure loans and they needed authorisation to secure those loans while the president was away. The law actually provides for those authorisations.

“So, I did grant two of them and those were presidential approvals, but they are specifically for financing joint ventures, and they are loans not contracts,” the vice president said.Also yesterday, Kachikwu said his recent memo to President Buhari was not anchored on exposition of fraud in his ministry as largely held.He explained that it had the thrust of proffering solutions to moving the oil and gas sector forward, stressing that he had unalloyed confidence in the president.

During the third and last day of the three-day Nigerian content workshop sponsored, among others, by the Nigerian Content Development and Monitoring Board (NCDMB) at the Imo Trade and Investment Centre, Owerri, Kachikwu said his understanding of Buhari was that of a ‘clean and meticulous’ leader, noting that his work would better the lot of Nigerians.

The minister wondered why his letter occupied conversations of Nigerians for many days, stressing that people should disabuse their minds of the conception of fraud and regard the memo as a correspondence to put the country on the path of good governance.Kachikwu said that Buhari had directed that he should work cordially with Baru to move the corporation forward.

To his audience made of scores of experts in oil and gas industry, he said: “The conversation has been largely misunderstood to border on fraud. It was not on fraud, but on governance and suggested ways to go about it. I think a lot of people got it wrong. People dwell much on issues of sensationalism and leave the main substance. I think I and Baru are working together as Mr. President has directed to move forward.”

Kachikwu praised the leadership of the NCDMB led by its Executive Secretary, Simbi Wakote, for a high performance in their activities anchored on promoting the Nigerian content issues in the oil and gas sector of the nation’s economy.Meanwhile, Anambra, Benue Trough, Benin, Sokoto and Bida may soon be regarded as oil- producing areas as the Federal Government renewed its commitment to hydrocarbon exploration in these places.

Meanwhile, the NNPC has reinvigorated exploratory activities in some seven hydrocarbon basins in the country outside the Niger Delta. These are Anambra, Benue Trough, Benin, Sokoto and Bida.Baru disclosed this yesterday when he received the Governor of Yobe State, Ibrahim Geidam at the NNPC Towers, Abuja.

Briefing the governor on efforts to increase exploratory activities in the industry, Baru stated that modalities were on to open up all the basins in the country to prospective investors.“We are on target and we are looking at the prospectivity of the whole basins of Niger Delta, Chad, Anambra, Benue Trough, Benin, Sokoto and Bida. We are focused on delivering on these basins in line with our mandate,” he affirmed.

The GMD said preliminary exploratory activities had indicated some signs of hydrocarbon in eastern Yobe of the Chad Basin, adding that once the corporation received security clearance, the 3D seismic data acquisition in the area would continue as scheduled.Geidam said his visit was informed by the commitment of President Buhari’s government to increase Nigeria’s oil reserves through the exploration of oil and gas in the Chad Basin, adding that the policy direction of the Federal Government was of interest to the state because the basin covers a large area including Yobe State.

The two projects are expected to generate incremental revenues of about $16 billion within the assets’ life cycle and would generate employment opportunities in the industry, boost gas supply to power and rejuvenate Nigeria’s industrial capacity utilisation.