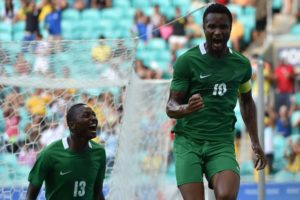 Team Nigeria’s medal hope at the ongoing Rio 2016 Olympic Games dwindled yesterday as Odunayo Adekuoroye and Blessing Oborodudu were edged out in the wrestling event of the championship.

Oborodudu competed against Mongolia’s Battsetseg Soronzonbold in the freestyle event of women’s 63kg.

Despite forcing the match to 1-1, the Mongolian won based on technical points to bundle out the Nigerian in the quarterfinal round.

With all the five female wrestlers exiting the competition, the hope of medal now hangs on the men’s team – Amas Daniel and Soso Tamarau in the men’s 65kg and 86kg.