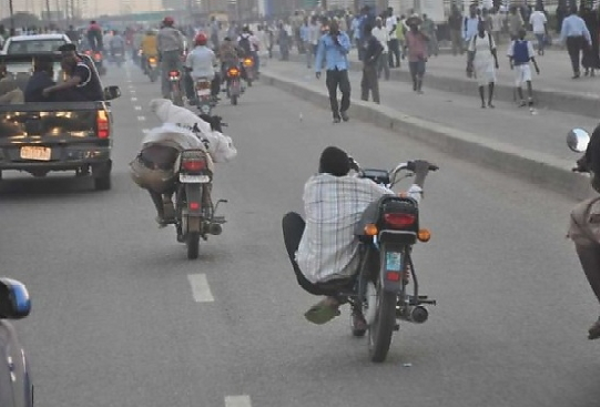 By Uche Amunike
The newly imposed Okada ban in Lagos State designed to take effect in six Local Governments and nine Local Council Development Areas of the state by the Governor, Babajide Sanwo-Olu, has kicked off, Wednesday June 1, 2022.
The ban, was announced during a meeting convened by Governor Sanwo-Olu on May 18, 2022 with the State Commissioner of Police, Area Commanders and Divisional Police Officers at the State House in Alausa-Ikeja, where he stated that with its commencement, security operatives were expected to enforce the proscription order throughout the affected councils, namely Eti-Osa, Surulere, Ikeja, Apapa, Lagos Mainland and Lagos Island, as well as the affected nine Local Council Development Areas, namely Ojodu, Onigbongbo, Itire-Ikate, Ikoyi-Obalende, Lagos Island East, Yaba, Iganmu, Coker-Aguda and Iru-Victoria Island.
Sanwo-Olu, while addressing the Police Chiefs at the meeting declared that the Okada ban in Lagos state was ‘total and indefinite’. He also maintained that the government sees the activities of the Okada riders as dangerous to road users.
The State Police Command made it clear that any passenger or motorcyclist that goes against the Okada ban in Lagos State will face arrest and prosecution. While the State Police Commissioner, Abiodun Alabi referred to them as criminals that must be taken off the roads, he also noted that even though the ban may have its disadvantages, like crime increase, the Police Force was ready to make plans on how to deal with it.
This was further explained by the Lagos State Public Relations Officer, Benjamin Hundeyin, who tweeted thus: ‘Under the new total ban of motorcycles in six local government areas of Lagos State, passengers and riders alike will be arrested and prosecuted.’
‘The passenger is an accomplice. Ignorance will not be an excuse!’, he concluded.
In reaction to the fears nursed by the general public over the plans of these motorcycle operators who have not hidden the fact that they intend to cause violence as they have reportedly made threats about disrupting social and commercial activities over the Okada ban in Lagos state, the Police Command has assured all Lagosians to remain calm as there was no cause for alarm.
Hundeyin stated that the State Commissioner of Police, Abiodun Alabi has deployed human, material and operational resources to prevent any breakdown of law and order.
He also stated that a well structured security architecture brought about by a detailed crime mapping of the State has been emplaced.
Meanwhile, the Lagos State Task Force has seized over 200 motorcycles in Lekki before the deadline. The need for this current Okada ban in Lagos State became expedient over two years after the ban on motorcycle and tricycle operations was enforced across the state. But then the government explained that the law was eventually relaxed because of the impact of the Coronavirus induced lockdown and global economies, especially as many Nigerian families have since that pandemic, continued to struggle for survival even after the lockdown came to an end.
The Governor maintained that these commercial Okada operators have continued to be a menace in the state, even as he listed security reports to back his position.
QUICK SHARE: