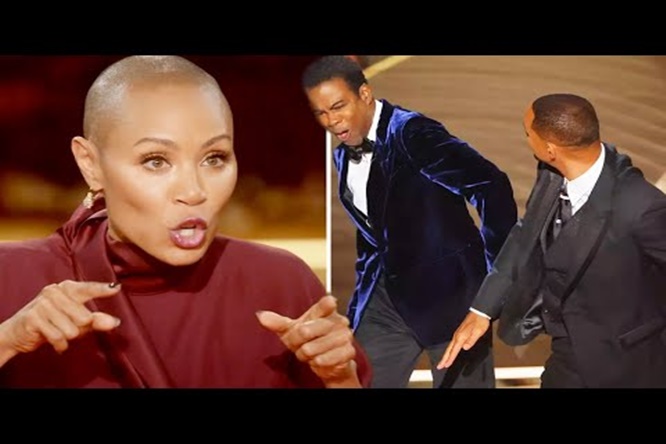 Two months following the viral slap her husband Will Smith gave Chris Rock at the Oscars, Jada Pinkett Smith has directly reacted to it.

Jada Pinkett Smith addressed it during an episode of her Facebook talk show “Red Table Talk” on Wednesday, June 1, months after her husband struck comedian Chris Rock for making a joke about Pinkett Smith’s shave.

Making revelation about the autoimmune condition that caused her hair loss, Jada wrote:

“This is a really important ‘Red Table Talk’ about alopecia. Considering what I’ve been through with my health and what happened at the Oscars, thousands have reached out to me with their stories.”

“Now, about Oscar night,” Pinkett Smith began. “My deepest hope is that these two intelligent, capable men have an opportunity to heal, talk this out and reconcile. The state of the world today, we need them both. Until then, Will and I are continuing to do what we have done for the last 28 years, and that’s keep figuring out this thing called life together.”

Jada then pivoted to an emotional conversation with Nicole Ball, whose 12-year-old daughter, Rio, died by suicide after being bullied at school for her alopecia areata, which caused her to lose her hair.

Two weeks after Rio’s death, the 94th Academy Awards took place and that was where Rock joked that Jada looked like she was auditioning for “G.I. Jane 2.”

“It is not a joke,” Ball said of the medical condition that caused her child to commit suicide.

Since 2018, Pinkett Smith has been public about her struggles with the disease.

“There was so much shame,” Jada said on Wednesday’s show, which also featured a doctor who explained the condition.

The actress explained: “I think the part that makes it most difficult for me is that it comes and goes. It’s stressful. A patch grows then another patch comes out. That gives me a lot of anxiety — ‘Oh, well what’s my hair going to look like today.’”

“I don’t mind cheating in a relationship”- Ric Hassani says, opens up on his relationship with Waje [Video]