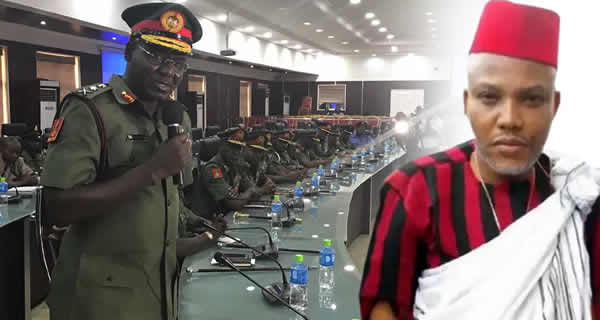 They insisted that Operation Python Dance is still on

Top military sources from the army headquarters have spoken about the disappearance of Nnamdi Kanu saying the leader of the Indigenous People of Biafra is not in their custody.

Kanu’s lawyers led by Ifeanyi Ejiofor had filed a suit before the Federal High Court in Abuja on Wednesday, September 27 asking for an order for Lt. Gen. Tukur Buratai to produce him in court.

The Punch however reports that a top military source said Kanu’s whereabouts was not known to the army and that it would have been revealed if he was in their custody.

He said: “If you follow the trends of things, the army has not been talking about a proscribed group. If someone says he does not know where Kanu is, who gave him the authority to file a motion against the army?

Another source from 82 Division headquarters, Enugu said: “Kanu is not with us. And I am not aware of his whereabouts.”

Meanwhile, Kanu’s brother simply identified as Fine Boy who spoke with The Punch on Sunday, September 17, had said only Kanu could disclose his own location.

He said: “Only my brother can tell Nigerians where he is, I can’t. I don’t know why the Army should call IPOB a terrorist organisation, it is out of their desperation to arrest Nnamdi and frustrate the Biafran struggle. We have petitioned the United Nations and the European Union.

“…Nnamdi will soon disclose his current location and IPOB will also react to the proscription of the group by the South-East Governors’ Forum.”

NAIJ.com previously reported that Senator Enyinnaya Abaribe was queried by his colleagues, mostly from the northern part of the country, for standing as surety for Kanu.

The heated meeting reportedly took place when the Senate went into an executive session, minutes after resumption.

Reacting to the report, Abaribe denied that he was queried by the Senate for standing surety for Kanu.