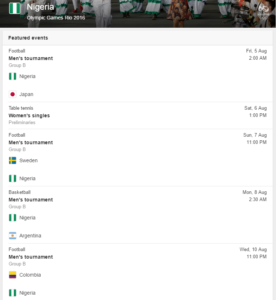 Barely 20 Hours to the kick-off of the much expected 2016 Olympics in Rio de Janeiro in Brazil, a full schedule of the sporting activities in which Team Nigeria will participate has been released.

As the Olympics is scheduled to start on Friday, Nigeria will first feature in a Group B Men’s tournament football match against Japan after which the country’s flag bearer at the Olympics, Funke Oshonaike and her male Table Tennis counterpart Segun Toriola, will participate in the preliminaries of the table tennis singles.

Thereafter, Nigerian football team will play the second leg of the Group B match against Sweden on Sunday at about 2:00am Nigerian time.

On Monday, the Basket Ball team will take on their Argentine counterparts in the first leg of the Group B match of the men’s tournament.