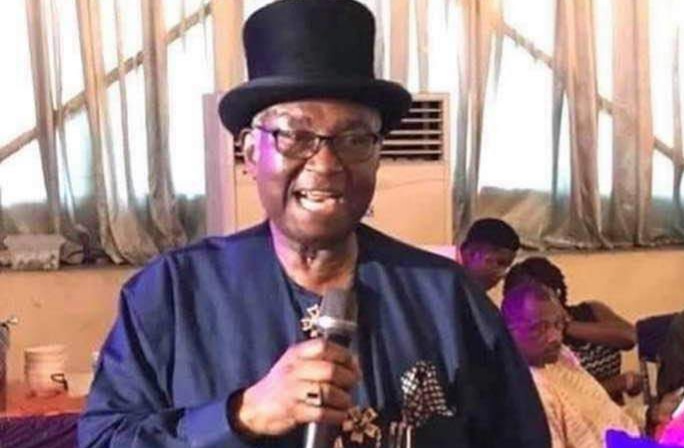 By Uche Amunike
Nigerian politician, elder statesman and four-time Minister, Chief Alabo Graham-Douglas has just been confirmed dead.
According to the son of the Rivers born politician, Chief Semabo Graham-Douglas, his father gave up the ghost in the early hours of Monday in Abuja at the age of 82.
Born on May 8 1939 at his native Abonnema in the Akuku-Toru Local Government Area of Rivers State, the late Ijaw Icon was the son of a native court judge in Abonnema and Napo Graham-Douglas was the first indigenous Attorney-General of Nigeria.
In 1986, he became Commissioner for Youth, Sports and Culture in the Rivers State Government.
When Ibrahim Badamosi Babangida was Military Administrator, he appointed the late Graham-Douglas as Federal Minister for Social Development Youth and Sports and later became Minister of Petroleum Resources.
He was eventually moved to the Ministry of Aviation where he handled the deregulation of the Aviation industry. He also served in the Special Tenders Board which developed the Federal Capital Territory (FCT), Abuja.
Alabo Graham-Douglas became the Chairman of one of the groups that merged into the Peoples Democratic Party (PDP), known as the Southern Minorities Movement in 1992.
In 1998, he was a candidate in the PDP primaries for the presidential nomination, but lost to Olusegun Obasanjo.
Interestingly, President Olusegun Obasanjo appointed him as Minister of Employment, Labour and Productivity in June 1999.
Just one year after that appointment, he was moved to the Ministry of Culture and Tourism, July 2000.
It was the late Alabo Graham-Douglas that led the delegation that paid a visit to China where he signed the 2000-2002 Executive Plan of Cultural and Educational Exchange between Nigeria and China.
He was Chief Host at the Africa Travel Association’s Fourth Eco-tourism symposium in Abuja in December 2000.
Meanwhile, President Muhammadu Buhari has expressed his sadness over the passing of the late statesman, Alabo Graham-Douglas.
In a statement issued by his spokesman, Femi Adesina, he sympathized with the government and people of Rivers State over the death of the late Democrat, political stalwart and administrator, noting that he served differently as Minister of Aviation, Minister of Labour and Productivity and Minister of Tourism.
The president noted that the late Graham-Douglas left a legacy of distinguished service to the country.
He lauded the historic roles played by the fallen Statesman in entrenching democratic rule and a liberal culture, by joining Nigerians and global leaders to stand and speak for Justice and fairness while also promoting grassroots development among his people, during his time.
He reiterated that Alabo Graham-Douglas invested so much in his countrymen and built a lot of institutions for which posterity would remember him by.
He comforted his family while praying that the almighty God will grant his soul eternal rest.
Several family members and friends of the late alabo Graham Douglas have shared their reactions to his sudden demise in their Facebook pages since news of his death filtered in.
QUICK SHARE: