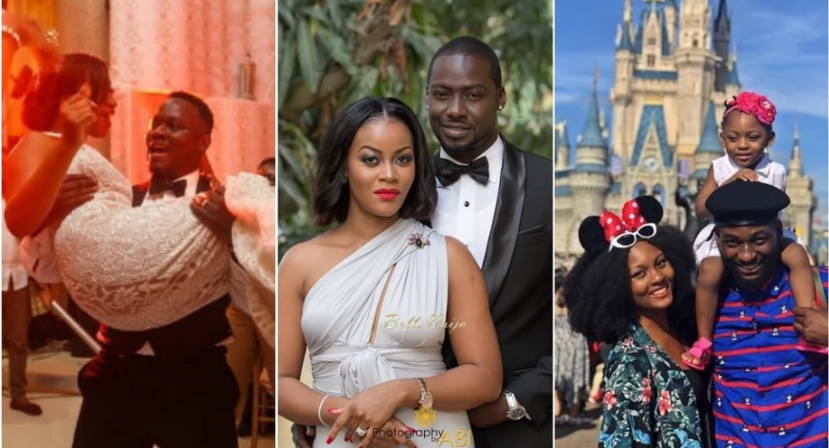 But in the case of divorces, some celebrities have managed to keep it on the low for a long time.

Here are some of your favourite celebrity marriages that ended quietly.

Nigerian music star Dr Sid and Simi got married in 2014 in one of the most talked-about celebrity weddings. They welcomed their first daughter and a second one a few years later.

Sid has remained silent about his divorce to date.

Ighodaro and Ajibade met onset of a TV show and got married afterwards to fans and industry delight.

The couple’s wedding ceremony was so huge, that it was televised on live TV.

In February 2019, fans and followers of Osas and Gbenro woke up to a rather strange post from the latter. He had in his post called out Osas over her parenting style. It was clear that they were separated at that time.

Gbenro Ajibade and Osas Ighodaro with their daughter [Instagram/GbenroAjibade]

A few months later, Osas took down Gbenro’s name from her Instagram handle. After several months in the United States of America, Gbenro marked his return to Nigeria with an interview on Rubbin Minds in December where he confirmed that they are divorced.

Etinosa Idemudia’s marriage to Benin-based lawyer, Ighrosa is the most shortest-lived on this list. The former couple tied the knot in September 2020 and welcomed their first daughter on Christmas Day, the same year.

The movie star had planned to keep the news of her marriage crash away from the prying eyes of the public but the press had other plans. In May 2021, she called out a blogger for breaking the news about her marriage collapse.

Mofe Duncan and Jessica Kakkad had one of the most discreet breakups in the history of celebrity marriage crashes. It had to take a die-hard fan of Jessica to burst the bubble in September 2019.

A few hours after the news broke, Mofe Duncan took to his Instagram page to release a statement where he revealed that the marriage had crashed a year earlier and that he still maintains a cordial relationship with Jessica and her family.

Another celebrity marriage collapse that was very discreet was that of former Most Beautiful Girl in Nigeria, Anita Iseghohi, and her business executive husband, Tom.

The former beauty queen took to her Instagram page in November 2018 where she revealed that her 11 years marriage to the former MD of Transcorp Corporation had ended. The union is blessed with three children.

Just like Osas and Gbenro, Damilola Adegbite and Chris Attoh had one of those onset beautiful love stories. The couple got hitched on February 14, 2015, in Accra, Ghana.

In April 2017, Chris Attoh slammed divorce rumours in a radio interview. The couple had earlier unfollowed each other on Instagram.

The actress remained silent about their separation after that. However, in September that same year, Attoh finally revealed that their marriage had crashed.

Blossom Chukwujekwu’s split from Maureen Esisi was probably the most shocking separation gist in 2019. Social media will not forget in a hurry how Blossom and Maureen showcased their beautiful and ‘happy marriage’ to the admiration of many.

In September 2019, the news broke of their separation.

While blogs gave different accounts of the reason behind their marriage collapse, the couple remained mute. Although Maureen has made several cryptic comments about their failed marriage.

Blossom on the other hands has done a great job keeping conversations about his failed marriage out of his way.