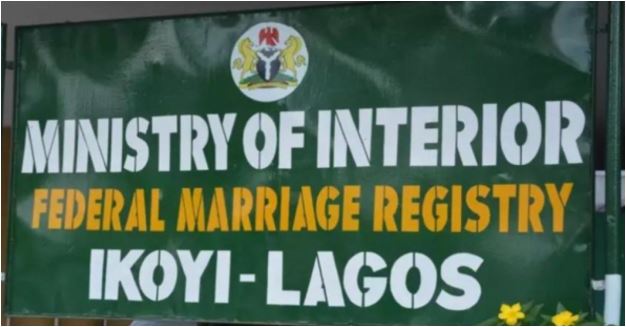 The Lagos high court has ruled that marriages conducted by Federal Registry, Ikoyi is not legally binding.

Chuka Austine Obiozor, a justice, issued a restraining order to the Ikoyi registry from conducting marriages, saying it is unconstitutional for the federal government to perform the duties of the state and local governments.

The judgement delivered on Suit No: FHC/L/CS/1760/16 said marriage registries in the local government and local council development areas of Lagos state are the authentic and legally-binding government divisions established to carry out such functions.

Addressing a press conference on Thursday, Muslim Folami, the Lagos state commissioner for local government and community affairs, said the judgement will be communicated to all stakeholders, including embassies.

He said the decision of the court is supreme and is legally binding on all and that all marriages conducted and registered in any of the 20 local governments and 37 local council development areas are valid and in accordance with the marriage act.

According to him, the judgment will put a stop to the perception of superiority of Ikoyi Marriage Registry over the local government registries.

“We are going to use every available platform in the five divisions across the state to sensitize our people and inform them about this latest development; From Epe to Ikorodu, Badagry, Ikeja and Lagos Island,” he said.

In his remarks, Deji Sokeye, the president of the marriage registrars in all the local government and local council development areas, said the responsibilities of the LGAs/LCDAs has come back to them by the virtue of the law and as provided for in section 30 (1) of the marriage act and section 7 (5) of the 1999 constitution.

He said the judgement would restore confidence in the certificates already issued and those that will be awarded in future by the registries.