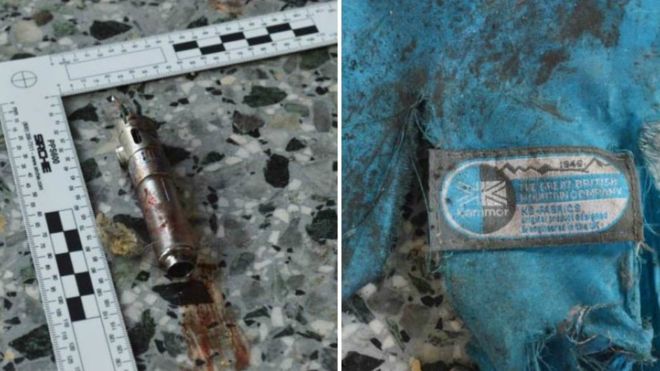 Police investigating the Manchester Arena bomb attack have stopped sharing information with the US after leaks to the media.

UK officials were outraged when photos appearing to show debris from the attack appeared in the New York Times.

It came after the name of bomber Salman Abedi was leaked to US media just hours after the attack, which left 22 dead.

Theresa May said she would tell Donald Trump at a Nato meeting that shared intelligence “must remain secure”.

The US’s acting ambassador to the UK “unequivocally condemned” the leaks in a BBC radio interview.

“We have had communications at the highest level of our government … we are determined to identify these leaks and to stop them.”

Meanwhile, the Queen has been to the Royal Manchester Children’s Hospital visiting some of the injured as well as members of the emergency services.

While there she paid tribute to Manchester and the “extraordinary” way the city had responded to Monday’s attack at an Ariana Grande concert, in which 116 people were also injured.

In total eight men are now in custody following the bombing carried out by Manchester-born Abedi, a 22-year-old from a family of Libyan origin.

The arrests have been “significant” while searches of premises have also yielded items “important to the investigation”, Greater Manchester Police said.

It has also emerged two people who had known Abedi at college made separate calls to a hotline to warn the police about his extremist views.

A Whitehall source said Abedi was one of a “pool” of former subjects of interest whose risk remained “subject to review” by the security service and its partners.

Its chief constable Ian Hopkins said the recent leak had caused “much distress for families that are already suffering terribly with their loss.”.

The force – which is leading the investigation on the ground – gives its information to National Counter-Terrorism, which then shares it across government and – because of the Five Eyes intelligence sharing agreement – with the US, Australia, Canada and New Zealand.

All other US-UK intelligence is still being shared, while five terrorist plots have been disrupted in the UK since the 22 March Westminster attack, the BBC has learned.

Home Secretary Amber Rudd has said she is “confident” the leaks will now end, after having voiced her irritation following the leak of the attacker’s name.

However, the pictures of debris – which appear to show bloodstained fragments from the bomb and the backpack used to conceal it – were subsequently leaked to the New York Times, prompting an angry response from within Whitehall and from UK police chiefs.

BBC security correspondent Gordon Corera says UK officials believe that US law enforcement rather than the White House is the likely culprit for the leaks.

The police decision to stop sharing information specifically about the Manchester attack with their security counterparts in the US is a hugely significant move and shows how angry British authorities are.

The information from the crime scene wasn’t shared on a whim: the British and Americans have a lot of shared world-leading expertise in improvised explosive devices and scientists would be discussing whether the Manchester device tells them something new that could, ultimately, track down a bomb-maker.

Other sharing will continue. The UK and US share a vast amount of information about terror and espionage threats – it is a tight-knit network that also encompasses Canada, Australia and New Zealand.

That system is based on trust and the “control principle”: if a piece of intelligence is shared, the receiving nation has no right to further disseminate it without permission.

The UK’s National Police Chiefs’ Council described the “unauthorised disclosure” as a breach of trust which had potentially undermined a “major counter-terrorism investigation”.

Counter-terrorism detectives have spoken in the past about how a delay of about 36 hours before the public know who is being investigated can allow known associates of the suspect to be arrested without being tipped off.

Lord Blair, who was the head of the Metropolitan Police at the time of the bombings in London on 7 July 2005, said a similar leak had happened then.

“It’s a different world in which the US operate in terms of how they publish things and this is a very grievous breach but I’m afraid it’s the same as before,” he said.

What’s happening with the investigation?

Eight men and one woman have been arrested in the UK since Monday night, including Abedi’s older brother Ismail, 23. The woman has since been released.

Abedi’s younger brother Hashem, 20, was held by special forces linked to the interior ministry in the Libyan capital Tripoli, as was their father.

Speaking on Wednesday, Greater Manchester Chief Constable Ian Hopkins said: “It’s very clear that this is a network that we are investigating.”

As part of their investigation, raids involving controlled explosions have been carried out at a block of flats near Manchester Piccadilly station in the city centre on Wednesday and at an address in the Moss Side area of Manchester in the early hours of Thursday.

Who are the victims?

Abedi detonated his “nuts-and-bolts” bomb at the end of an Ariana Grande gig as children, teenagers and others were making their way out of Manchester Arena.

Others, including parents, were waiting in the foyer to pick up family and friends when the bomb went off.

The youngest so far known to have died is eight-year-old Saffie Roussos. Off-duty Cheshire police officer Elaine McIver was also among the dead.

The latest victims to be named are Wendy Fawell, 50, from Otley, west Yorkshire andEilidh MacLeod, a 14-year-old from Barra in the Outer Hebrides, and 19-year-old Courtney Boyle.

Of the 116 injured, 75 remain in hospital. Of those 23 are in critical care, five of them children.

Who was the attacker?

Salman Abedi was a 22-year-old born in Manchester to Libyan parents, and a former University of Salford student.

He attended Burnage Academy for Boys in Manchester between 2009 and 2011, and The Manchester College until 2013.

A former classmate told the BBC that Abedi was a “very jokey lad” but also “very short tempered” and would get angry at “the littlest thing”.

The man, who did not want to be identified, said Abedi had hung around “the wrong crowd and was very, very gullible”.

A Muslim community worker, who did not want to be identified, has told the BBC that two people who had known Abedi at college had made separate calls five years ago to a hotline to warn about his extremist views.

He said they had been worried that Abedi was “supporting terrorism” and he had expressed the view that “being a suicide bomber was ok”.