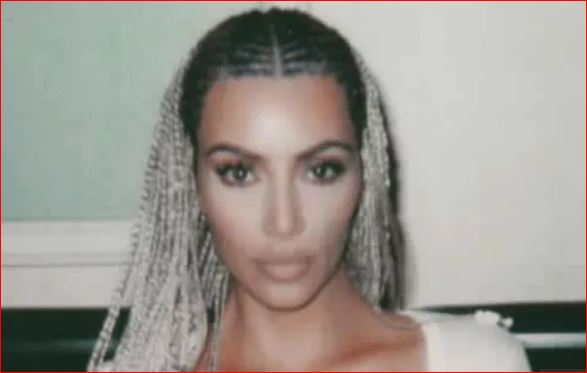 Reality TV star, Kim Kardashian, has landed in a racial mess. She is being accused of cultural appropriation, meaning she has credited a cultural element that originated from a minority culture to a dominant culture.

In what seems a replay of her claim in a 2013 post ascribing the same hairdo to the same actress, the 37-year-old posted a video on social media over the weekend, wearing platinum blond braids accessorized with white beads at the ends.

During the short clip, she said, “So guys, I did Bo Derek braids, and I’m really into it.”

In another post wearing the same hairstyle, she described herself as Bo West in the caption.

Shortly after sharing, social media went agog, reminding her that even though Bo Derek might have rocked the hairstyle in the 1979 movie “10,” the style didn’t belong to Bo Derek and she was not the originator.

Folks on social media took time to teach Kim K various lessons in history, pointing out that the hairstyle actually originated from the Fulani people of East and West Africa.

They also responded by posting photos of the hairstyle on other people other than Bo Derek.

Kim Kardashian got on Fulani braids and called them “Bo Derek” braids. These why culture appropriation trash. Also, how many times is that family gonna get dragged for them to stop appropriating other people’s culture. This why Beyonce don’t like her stiff lips ass. pic.twitter.com/Nd2NHt7aOB

Here are other comments about the style.

The hairstyle Bo Derek wore was the way many Black Women wore their Hair in the 70's way before Bo Derek's stylist was inspired by these women to do the style. The point is Give Credit where it's due. Pics of these Braids are seen all over social Media on Black girls these days

They’re called Fulani braids….originating in West Africa so maybe the Fulani people for a start 🤷🏾‍♀️

Girl Bo Derek wore these braids in 1979, so technically she’s not wrong. That’s just the reference she chose. pic.twitter.com/vMw0yR2Q2H