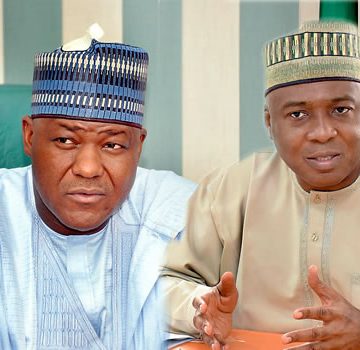 The Socio-Economic Rights and Accountability Project (SERAP) on Sunday revealed that it has won the latest round in the legal battle to compel the Senate and the House of Representatives to account publicly for the costs of running the two arms of government.

Justice Rilwan Aikawa of the Federal High Court in Ikoyi, Lagos on Friday ordered the Senate President Dr Bukola Sakari and Speaker of the House of Representatives Mr Dogara Yakubu to account for the spending of N500 billion as running cost for the legislative body between 2006 and 2016, and disclose monthly allowances of each member.

Justice Aikawa granted the order following the hearing of an argument in court in an exparte motion filed by SERAP’s counsel Ms Bamisope Adeyanju.

The suit numbers FHC/L/CS/1711/16 and FHC/L/CS/1710/16 filed last December followed disclosure by Abdulmumin Jibrin that Nigerian Senators and House of Representatives members pocketed N500 billion as ‘running cost’ out of the N1 trillion provided for in the National Assembly budgets between 2006 and 2016, and by former president Olusegun Obasanjo that each Senator goes home with nothing less than N15m monthly while each member receives nothing less than N10m monthly.

“I have looked at the papers filed by SERAP and I am satisfied that leave ought to be granted in this case for judicial review and an order of mandamus directing and compelling Saraki and Dogara to account for the spending of the running cost and disclose the monthly income and allowances of each Senator and member,” the judge ruled.

According to a statement by SERAP, the order by Justice Aikawa has now cleared the way for SERAP to advance its case against the Senate President and the Speaker of the House of Representatives.

“The motion on notice is set for Tuesday, December 12, 2017 for the hearing of argument on why Saraki and Dogara should not be compelled to publish details of the spending on the running of the National Assembly and the exact monthly income and allowances of each Senator and member.”

SERAP in the suit is asking that by virtue of the provisions of Section 1 (1) and Section 4 (a) of the Freedom of Information Act 2011, the Defendants/Respondents are under a binding legal obligation to provide the Plaintiff/Applicant with up to date information on the spending allowances of each Senator and member including details of projects on which the N500 billion running cost between 2006 and 2016 were spent.